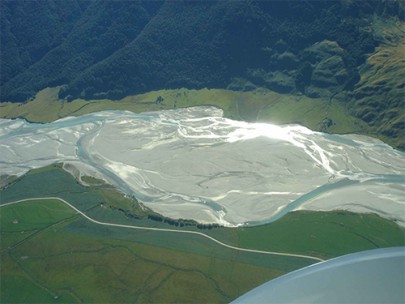 Subterranean river gravels are found mainly beneath braided rivers and can be divided into two intergrading zones. The hyporheic zone is the saturated interstitial area beneath the streambed, and into the stream banks, which contains some proportion of channel water, or that has been altered by channel water infiltration (White 1993). Beyond this is the phreatic zone where water permanently saturates the interstices, and is referred to as groundwater. Thus the depth of the hyporheic zone and the points where the hyporheic and phreatic zones merge vary from reach to reach and are unknown in most rivers. As there is no photosynthesis in these combined zones, animals are dependent on organic material derived from outside.

The fauna of these systems is not sufficiently well understood to classify species by threat category. The stygobitic (restricted to groundwaters) invertebrates living in these habitats are dominated by copepods, with lesser numbers of amphipods, gastropods (e.g. Hadopyrgus brevis, Saganoa mica), and Aranae (e.g. Anopsolobus subterraneus) (see Scarsbrook & Fenwick 2003).

Agriculture poses a threat because of groundwater pollution, especially with nitrates and excessive groundwater abstraction. Urbanisation is not as widespread as agricultural impacts, but impacts may be highly significant over small areas, especially via land–based sewage effluent disposal.

On the likely assumption these systems are found mainly in association with braided rivers, they occur throughout the South Island, particularly on the eastern side, and south of the Buller River in the west. In the North Island they occur mainly on both sides of the axial ranges from East Cape southwards.