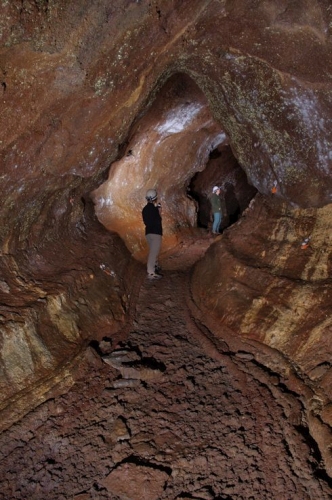 Note: molten basalt cools from the surface inward, promoting widespread cracking; these cracks provide the main faunal habitat. Occasionally, hot lava continues to flow beneath a cooled and hardened surface, producing lava tubes/caves, which form a small part of this network of voids.

There is nothing known specifically about the biology of this habitat.

Plant roots penetrating this habitat have been found elsewhere to be a major source of food/energy input to this ecosystem. It is possible that forest clearance of these ecosystems and agricultural use have had long–term consequences. including compaction of the soil surface and the halting of root penetration to depth, halting the egress of water and food, but allowing the egress of sediment and pollutants. Urbanisation may have similar effects and may be of minor importance for Banks Peninsula and Otago Peninsula but more important for Auckland. Many of the natural freshwater springs around Auckland City, e.g. Western Springs, which arise from the basalts, were once used as water supplies by residents until city expansion led to increasing pollution, so that they were no longer deemed safe for human use. Drainage alteration to natural water flows and introduction of pollutants through mining and quarrying have destroyed some areas entirely and have led to increased siltation and pollution. Recreation could potentially impact on cave/tube habitat but so little area is accessible that the effects are likely to be extremely limited.

Very little is known about the distribution or biology of this ecosystem and the following is speculative. They are likely to occur in the three areas of New Zealand with extensive basalt rocks: Auckland City, Otago Peninsula, and probably Banks Peninsula. Caveats include the fact that Auckland basalts are comparatively young, so they may well retain a reasonable volume of voids; on the other hand they may be so young that relatively few species have evolved to inhabit these voids. In contrast, the basalts of Dunedin and Banks Peninsula are very old and eroded, so that much of their original void networks are probably infilled with sediments, limiting available habitat for subterranean species. The total extent of this ecosystem is unknown but may be in the order of 10,000 to 100,000 ha.