Caves and cracks in karst 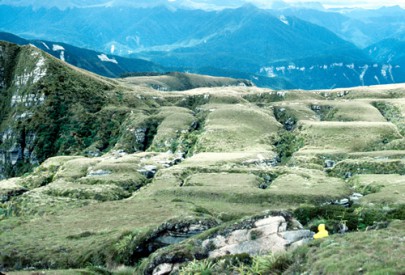 Karst caves are formed primarily by solution of bedrock along lines of weakness which water can penetrate. Enlargement may then be aided through other physical processes such as collapse. A cave, in recreational terms, is a macrocavern that a human body can get through, but there are extensive zones of smaller solution voids (mesocaverns), down to the order of a few tens of millimetres in diameter, both within caves themselves and within the karst generally. Some research suggests that these voids, which are not directly accessible to humans, actually constitute the major habitat used by obligate cave fauna.

Threatened, rare or data–deficient invertebrates include a cave dipluran (Burmjapyx sp.), a cave bug that feeds on tree roots (Confuga persephone), the large Nelson cave spider (Spelungula cavernicola) and cave centipedes (Cryptops sp., Haasiella sp.). A series of cave–dwelling aquatic hydrobiid snails are also in this category, but these require conservation reassessment since this group has recently been extensively revised taxonomically, with many new species described (Haase 2008). There are many species of cave weta in the Family Rhaphidophoridae, but many are undescribed and hence their threat status is uncertain, although no cave–dwelling species are currently thought to be threatened. The cave carabid beetles also require conservation assessment; species in the tribe Harpalini have recently been revised and new species described (Larochelle & Lariviere 2005), while those in the tribe Trechini, which contains most of our cave–dwelling carabids, have just undergone extensive revision (Townsend 2010).

These systems are relatively unmodified where they occur above treeline in the mountains, such as on the Arthur Range in western Nelson. At lower altitudes they are affected by agricultural runoff and below–ground seepage, including of nutrients and sediment, that impacts on quality of waters entering cave systems and which can potentially affect cave species. Although only a small number of known caves are affected by urbanisation, the effects are likely to be large (e.g. stormwater entrainment, with pollutants from roads, car washing, etc.), increased sediment runoff, permeability loss of karst surfaces over large areas (roads, buildings, etc.) reducing water entry in these places while simultaneously concentrating it at other points such as sinkholes. Once the entrances are partly infilled by slumping and so on, the resulting less–steep entrances make the caves become more accessible/liable to human and animal disturbance. Even rats are known to access almost the whole extent of the shallower limestone cave systems in New Zealand, but we do not know how regularly they do so or what level of impacts they may have on cave ecosystems. There is some evidence their entrance to caves follows human egress. Threats from recreational use are difficult to be certain about because cave passages are limited in width, although recreational use tends to impact on a significant portion of the cave floor (often 50% or more), where many species are concentrated. However, there is usually little impact on the mesocavern habitat which can’t be directly accessed (although quality of water entering that habitat may be affected – e.g. increased siltation). Larger species such as cave weta and Nelson cave spider (Spelungula cavernicola)are probably quite prone to disturbance by recreational activity.

These features are dotted liberally through at least 30 major and many minor karst areas, from Northland to Southland. The main karst areas are in the western Waikato–King Country, NW Nelson, and Westland.

Haase M 2008. The radiation of hydrobiid gastropods in New Zealand: a revision including the description of new species based on morphology and mtDNA sequence information. Systematics and Biodiversity 6: 99–159.

Facts about weta (Department of Conservation)