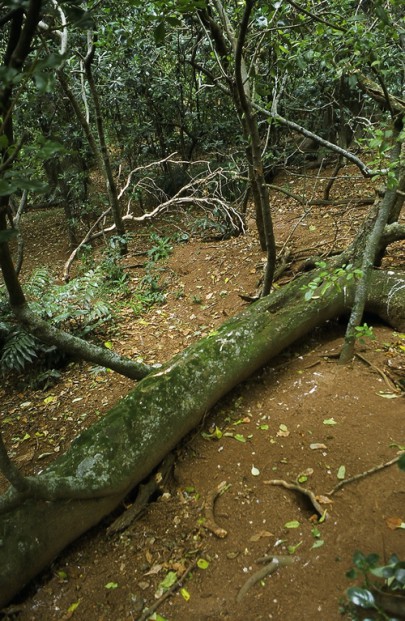 These areas are where soils have been disturbed and enriched by seabirds burrowing for nesting, track formation, and guano (excrement). Bird colonies may be in the open with almost no vegetation and only a few nitrophilous plants (e.g. Disphyma australe), beneath low-growing scrub (e.g. Muehlenbeckia complexa) or tussock grasses, or beneath a low forest where the birds simply drop through the canopy onto the forest floor where the cover of vegetation is proportional to the amount of bird activity.

High-fertility sites are invaded by weeds such as barley grass (Hordeum spp.) and annual exotic herbs spreading from surrounding areas, including via bird dispersal. These ecosystems are vulnerable to serious depletions of burrowing birds and other native fauna due to predation by rats, cats, and stoats. Sites with sparse and low vegetation cover pose little risk of fire, but forested sites may burn. The seabirds themselves are also at risk from being caught in fishing trawlers and from declining fish stocks on which they feed. Invasive mammals like rats also predate the chicks.

These systems may not have been naturally uncommon, because they would once have been widely distributed on the New Zealand coast, as far inland as the mountains of Te Urewera, and as high as the slopes of the Seaward Kaikoura Range, where they still exist. Now they are largely confined to islands, from the far northern New Zealand to the subantarctic. There are at least 22 in the Auckland Region alone.

Gilham ME 1960. Plant communities of the Mokohinau Islands, northern New Zealand. Transactions of the Royal Society of New Zealand 88: 79-98.

QEII National Trust. 2009. Seabirds: the impact of rats on their activities and the flow-on effects on ecosystems. Open Space 77: 16-17.