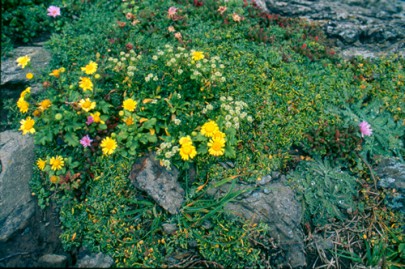 Nesting sea birds deposit guano (excrement) that can accumulate to form deposits of varying depth. These areas commonly have sparse vegetation because of bird trampling and the toxically high nitrogen status of fresh guano, but towards the edges, in sparse colonies or on shallow deposits, vascular plants can occur (Gilham 1960). Halophytic plants such as native ice plant (Disphyma australe), native shore groundsel (Senecio lautus), and Einadia trigonos are the most common. Green algae are also associated with guano, like the recently discovered species from the order Prasiolales (Prasiola novaezelandiae) (Heesch et al. 2012). Outside the breeding season, when the birds are absent and rain has washed some areas free of guano, there is likely to be a minor invasion of annual exotic weeds that can cope with the high nutrient status. These communities grade into other coastal communities such as coastal turfs.

During their nesting season, burrowing seabirds such as petrels, prions, and shearwaters share their burrows with the threatened ancient reptile, the tuatara's (Sphenodon punctatus). The seabirds' guano helps to maintain invertebrate populations that are a primary food source for the tuatara, including beetles, crickets, and spiders.

Seabird colonies (except for black-back gulls, which have increased since European colonisation) are threatened by predation by invasive mammals and domestic pets, disturbance from grazing stock, off-road vehicles and people, and encroaching urbanisation. Exotic weeds are present, but with the exception of the grasses mentioned above, these are mostly transient.

The largest guano deposits are found in association with Australasian gannet (Morus serrator) colonies that have been occupied for decades. The most extensive of these is on the North Island at Cape Kidnappers, Hawke Bay. They also occur also on several offshore islands, e.g. White Island/Whakaari and on coastal rock stacks. A large red-billed gull (Larus novaehollandiae ssp. scopulinus) colony occurs at Kaikoura, and large black-backed gull colonies can occur inland, e.g. Mt Tarawera dome tops where colonies are densely vegetated by exotic grasses, e.g. sweet vernal (Anthoxanthum odoratum), Yorkshire fog (Holcus lanatus). Smaller localised deposits are associated with shags and little blue penguins, which are common around much of the coastline.

Gillham ME 1960. Plant communities of the Mokohinau Islands, northern New Zealand. Transactions of the Royal Society of New Zealand 88: 79-98.

Gillham ME 1960. Vegetation of tern and gannet colonies in northern New Zealand with a comparative note on colonies in the Bass Strait, Tasmania. Transactions of the Royal Society of New Zealand 88: 211-234.

Norton DA, Delange PJ, Garnock-Jones PJ, Given DR 1997. The role of seabirds and seals in the survival of coastal plants: lessons from New Zealand Lepidium (Brassicaceae). Biodiversity and Conservation 6: 765-785.