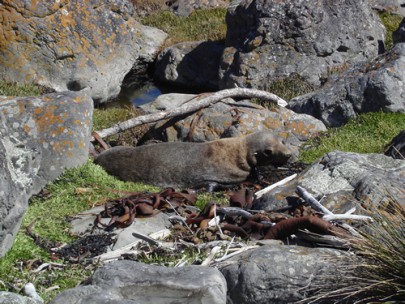 Marine mammal rookeries and haulouts result in coastal areas with soils compacted and enriched by nutrients. Historically, they would have occurred on a wide range of substrates from sand dunes to bedrock, and might have supported quite a wide range of vegetation, as animals inhabited coastal scrub and dune vegetation. However, with the demise of marine mammals from much of the New Zealand coast they are now largely confined to rocky shores with limited friable substrate for plant development, and only low herbs and graminoids are present.

Threatened and rare fauna include the Fiordland skink (Oligosoma acrinasum).

Enhanced fertility encourages weed invasion, although this probably does not threaten native plants directly because the latter are so sparse due to the impacts of the marine mammals.

Haulouts would once have been found along much of the New Zealand coast, as they still are on remote subantarctic Islands. On the mainland they are now restricted to rocky sites occupied by colonies of New Zealand fur seals (Arctocephalus forsteri), which are widely scattered along the coastline, e.g., on the Kaikoura coast, at Cape Foulwind in Westland, and at Cape Palliser in the North Island.

Norton DA, Delange PJ, Garnock-Jones PJ, Given DR 1997. The role of seabirds and seals in the survival of coastal plants: lessons from New Zealand Lepidium (Brassicaceae). Biodiversity and Conservation 6: 765-785.