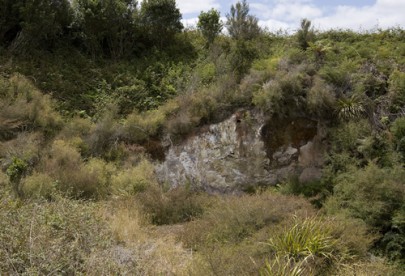 Hydrothermally altered soils have been changed by geothermal steam and are highly infertile, being strongly acidic, with low amounts of organic matter and phosphorus, and sometimes high concentrations of metals and trace elements (Given 1980). This ecosystem is dominated by scrub, mostly of prostrate kanuka (Kunzea ericoides var. microflora).

Wilding pines (Pinaceae), blackberry (Rubus fruticosus) and broom (Cytisus scoparius) can be problematic in marginal areas where the soils are sufficiently cool for their establishment, although the most heated soils tend to have few naturalized species. Geothermal areas are generally too unstable for urbanisation; however, they have been used as dumping grounds. In more stable areas, stock may trample vegetation when unfenced. Rabbits and hares are present in many geothermal ecosystems. Geothermal fluid extraction for energy can affect surface activity and change soil temperatures with consequent impacts on plant communities. Geothermal fluid extraction can also cause subsidence. Naturally occurring eruptions often destroy vegetation, as can infrequent fires. In places where these areas are used for recreational activities, e.g., motocross riding, considerable damage can result. There are some impacts from tourism, but usually these impacts are well controlled.

Hydrothermally altered ground occurs primarily in the Taupo Volcanic Zone on the Volcanic Plateau, in the central North Island.