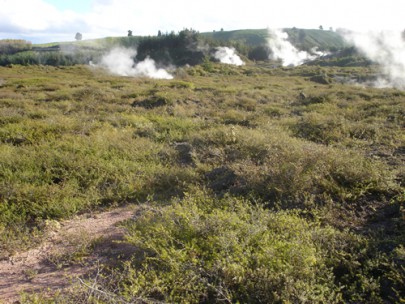 Geothermally heated soils result from heat flow through the ground (in contrast to heat losses from water sources or fumaroles, overflow from geysers and springs, or seepages to nearby lakes or rivers). The heat flowing through the heated ground is released at the surface as steam. Karapiti/Craters of the Moon (Given 1980), for example, is a steamfield that includes areas of heated ground as well as fumaroles. At Karapiti, there are no streams or areas of standing water. Soil temperatures at 15 cm depth in areas that support plants (including mosses) range from 40°C to 85°C. Prostrate kanuka (Kunzea ericoides var. microflora - a true-breeding form) is the most characteristic species.

Wilding pines (Pinus spp.) and blackberry (Rubus fruticosus) can be problematic in marginal areas where the soils are sufficiently cool for establishment. Although other weed species are present in most geothermal areas, geothermally heated soils mostly have few naturalised species. Stock can trample vegetation when areas are not fenced. The areas are generally too unstable for urbanisation, but some areas have been used as dumping grounds. Rabbits and hares are present in many geothermal ecosystems. Geothermal fluid extraction for energy can affect surface activity, changing soil temperatures, which can influence vegetation dynamics. Geothermal fluid extraction can also cause subsidence. In places where these areas are used for recreational activities, e.g., motocross riding, considerable damage can result. There are some impacts from tourism, but usually these are well controlled.

Heated ground primarily occurs in the Taupo Volcanic Zone on the Volcanic Plateau, in the central North Island.