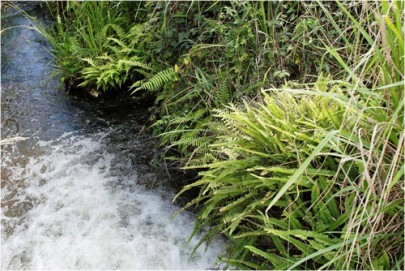 Geothermal streamsides are steam-influenced microhabitats created by hot springs and streams that allow species (particularly those with tropical origins) to exist in areas that would otherwise be too cold. For example, harakeke (Phormium tenax) and pukio (Carex secta) grow beside the hot pools in the Copland Valley at 450 m, a higher altitude than elsewhere in Westland.

Wilding pines (e.g., Pinus pinaster, P. radiata), blackberry (Rubus fruticosus), Scotch broom (Cytisus scoparius), buddleia (Buddleja davidii), and some exotic grasses can be problematic in marginal areas where the soils are sufficiently cool for their establishment. Geothermal areas are generally too unstable for urbanisation; however, they have been used as dumping grounds. In more stable areas, stock may trample vegetation when unfenced. Geothermal fluid extraction for energy can affect surface activity and change soil temperatures with consequent impacts on plant communities. Geothermal fluid extraction can also cause subsidence. There are some impacts from tourism, but usually these impacts are well controlled.Some trampling occurs where people access hot streams for bathing.

Geothermal streamsides are common in the Taupo Volcanic Zone on the North Island Volcanic Plateau and also occur in association with the Alpine Fault in the South Island as far south as the Copland Valley. Unfortunately many of these streamsides no longer support native vegetation.