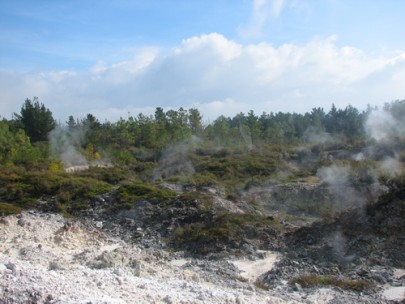 Fumaroles are vents or openings that issue steam and hydrogen sulphide and other gases, and are usually associated with past or current magmatic activity. Constant steam allows frost-sensitive species to survive on fumarole margins, including otherwise tropical ferns (listed below; Given 1980). The moss Campylopus pyriformis can be important close to fumaroles where soil temperatures are too hot for vascular plants. Low soil pH also limits the species that can survive in these areas.

Wilding pines (e.g. Pinus pinaster, P. radiata) and blackberry (Rubus fruticosus) can be problematic in marginal areas where soils are sufficiently cool for their establishment, but fumaroles tend to have few naturalized species.

Geothermal areas are generally too unstable for urbanisation; however some have been used as dumping grounds. In more stable areas, stock may trample vegetation when unfenced. Rabbits and hares are present in many geothermal ecosystems.

Fumaroles occur primarily in the Taupo Volcanic Zone on the Volcanic Plateau in central North Island.

Dumbleton LJ 1969. A new species of Ephydrella Tonnoir and Malloch (Diptera : Ephydridae) from hot springs and notes on other diptera from mineralised waters. New Zealand Entomologist 4: 38-46.