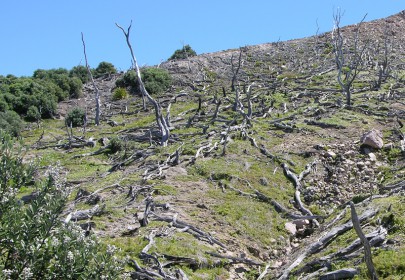 Acid rain is derived from craters and fumaroles associated with volcanoes or other forms of geothermal activity, such as those on White Island (Whakaari), which can continually omit gases at rates of several hundred to several thousand tonnes per day. These gases are mostly steam, carbon dioxide and sulphur dioxide, with small quantities of halogen gases (chlorine and fluorine). The acidic gases combine with water in the steam/gas clouds to form acidic liquid droplets. Volcanic gases at White Island are discharged at high temperatures (100-800°C). Fallout of this material is highly toxic and corrosive so that plant life is very limited.

The flora is poorly developed and waxes and wanes with changes in volcanic activity. The total flora (native and exotic) recorded on White Island (238 ha) at any one time is usually less than 12. Pohutukawa (Metrosideros excelsa) is the overwhelmingly dominant species, and surviving individuals resprout readily from epicormic shoots.

These highly acid systems have their own algal flora. Wise (1970) produced a list of 162 species of invertebrates mainly extracted from soil and litter samples. Most were collected from the Crater Bay - Ohauora southern region of the island, which now forms a ‘dead zone’ (Hutcheson 1992). Subsequently, a string of eruptive episodes and an almost continual low-level activity have resulted in a collapse of a rich and substantial invertebrate fauna (Wise 1970) to virtual absence. Hutcheson (1992) listed a depauperate fauna that recovered from dead and partially damaged forest zones, which comprised mainly flies, parasitic wasps, aphids, beetles, termites and spiders.

Isolation and environmental conditions (particularly acidic discharges and soils) deter most invasive species and many native species. Sea level rising could affect coastal flora and fauna. There is controlled access for recreation.

Acid rain occurs in association with several of the North Island volcanic fields, but especially at White Island (Whakaari), Bay of Plenty.

Hutcheson J 1992. Observations on the effects of volcanic activity on the insects and their habitat on White Island. New Zealand Entomologist15: 72-76.

Wise KAJ 1970. On the terrestrial invertebrate fauna of White Island, New Zealand. Records of the Auckland Institute and Museum 7: 217-252.