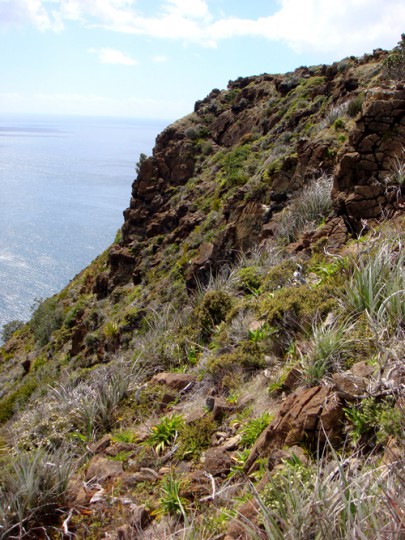 Coastal cliffs are very steep rock faces near the sea that are greater than 5 m in height. They may ascend in steps and have ledges, crevices and overhangs. Coastal cliffs may rise directly from the sea or be separated from it by a narrow shore. Ultrabasic (also known as ultramafic) rocks contain very little quartz or feldspar and are composed essentially of ferromagnesium silicates, metal oxides, and native metals (Anon 1962) that weather to soils with low concentrations of major nutrients and high concentrations of toxic metals such as nickel, chromium, and cobalt. Cliffs and outcrops provide many varied habitats: from bare rock that can only be colonised by mosses and lichens to deeper soils supporting woody vegetation; from highly exposed situations to heavily shaded and sheltered habitats; and from very dry to permanently wet surfaces. Coastal cliffs are influenced by salt spray, particularly near their bases, with halophytes often characteristic. Vegetation often consists of matted small-leaved shrubs such as wire-netting bush (Corokia cotoneaster), naturally uncommon Cassinia amoena, and Mingimingi (Leptecophylla juniperina). Native species that have been lost from neighbouring habitats may find refuge on cliffs and scarps.

Of serpentine soils: a blog by Christopher Taylor