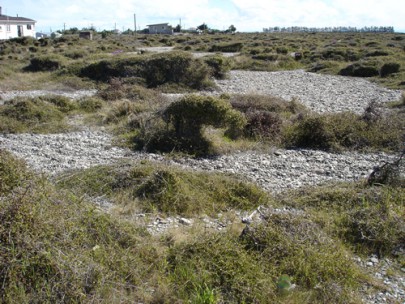 Stony beach ridges are former beach crests no longer influenced by wave action and comprised of wave-deposited water-smoothed gravel (particles 2-64 mm) and cobbles (64-256 mm) that are rarely disturbed by the sea. They may occur as a single ridge, or more commonly in a series of ridges becoming progressively older inland. They may be fronted by shingle beaches or shell barrier beaches. The vegetation is dominated by woody plants that form either continuous forest cover or discontinuous hummocks of shrubs. Characteristic species include kowhai (Sophora microphylla), lemonwood (Pittosporum eugenioides), mingimingi (Coprosma propinqua), thick-leaved mahoe (Melicytus crassifolius), and scramblers such as wire vine (Muehlenbeckia complexa) and leafless lawyer (Rubus squarrosus). Exposed, stable shingle is typically encrusted with lichens and bryophytes. Woody plants provide shelter for woody regeneration and for ferns such as leather-leaf fern (Pyrrosia eleagnifolia). Scattered grasses and herbs grow both in the shelter of woody plants and in open areas.

Stony beach ridges are often readily accessible, which makes them vulnerable to agricultural impacts, such as fertilising and stock grazing. Residential development is an increasing threat, as are off-road vehicles. In places they are mined for gravel.

The distribution of stony beach ridges is poorly known and most are likely to have been destroyed by land use changes. Extant stony beach ridges are known from the Auckland area at Miranda and Whakatiwai, Pukerua Bay in Wellington, and on the South Island at Rarangi (Marlborough), Kaitorete Spit in Canterbury, and possibly on the West Coast.