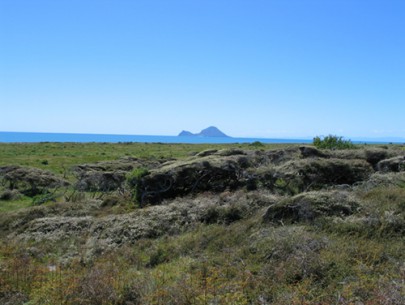 Stable sand dunes originate from active sand dunes comprising coastal sands. Through coastal aggradation, sand dune migration, or uplift of marine terraces (e.g., Pleistocene, early Quaternary) these dunes are now sufficiently distant from the sea to no longer be impacted by coastal disturbances. As they have become stabilised, their soils have accumulated organic matter and they are more or less completely covered in woody vegetation. In contrast to active coastal dunes, stable coastal sand dunes may support mature podocarp forest, areas of mutton-bird scrub (Brachyglottis rotundifolia var. rotundifolia), gorse (Ulex europaeus) manuka (Leptospermum scoparium) and kanuka (Kunzea ericoides var. ericoides) forest and shrubland. At many sites, the backdunes have been converted to plantation forest, mostly of radiata pine (Pinus radiata). Stable sand dunes differ from inland sand dunes in the nature of the source sands, i.e. from the sea versus from river or volcanic sand. As such, even though they occur far inland, the extensive sand dunes of the Manawatu are considered Stable sand dunes as they are derived from coastal sands.

The katipo spider (Latrodectus katipo) is a well-known threatened sand dune invertebrate. A recent discovery in this habitat is the undescribed minute sand rove beetle (Paradiglotta sp.) Together with its sister species, P. nunni, these flightless beetles are the only members of this genus, which is unique to New Zealand.

Demand for coastal property is still high so many beaches have housing on stable sand dunes; some remote areas are less affected. Development brings problems to the remaining areas in the form of intensive vehicle traffic.

Stabile sand dunes are found around many parts of the New Zealand coast and usually inland from current active sand dunes. They are most extensive in coastal Manawatu where the broad plain has allowed sand to migrate inland for thousands of years, with the period of maximum accumulation being about 11 000 yrs BP (Hawke & McConchie 2005). In Southland, remnants of the original podocarp forest remain, typically dominated by totara (Podocarpus totara).

Halting the great sand-drift: the "exoticisation" of our coast (Envirohistory NZ)