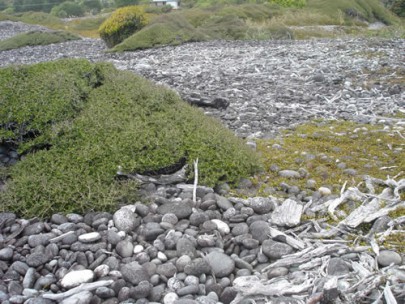 Shingle beaches are comprised primarily of a mixture of sand, water-smoothed gravel (>50%, particles 2-64 mm), and cobbles. Low vegetation occurs inland from the foreshore on the berm and backdune. Shingle beaches occur where rivers deliver large quantities of shingle to the coast or where it is being eroded from nearby coastal cliffs. Shingle beaches usually rise to a ridge beyond the high tide mark that is rarely disturbed by the sea. A lagoon or wetland may be impounded behind. Shingle beaches are subject to intermittent disturbance during storms. Nationally, plant composition varies with climate and the nature of the adjacent vegetation. The native vine shore bindweed (Calystegia soldanella) increases in importance on warmer beaches, and the exotic grasses ripgut brome (Bromus diandrus), hares-tail (Lagurus ovatus) and perennial rye grass (Lolium perenne) increase in importance on drier beaches. Beaches adjacent to native woody ecosystems are characterised by the presence of small native herbaceous species representative of forest understories and margins such as Hydrocotyle novae-zeelandiae var. montana, and native woody species such as broadleaf (Griselinia littoralis). On beaches distant from native woody ecosystems, exotic species such as the grass Yorkshire fog (Holcus lanatus), the herbs catsear (Hypochaeris radicata) and hawkbit (Leontodon taraxacoides), and the shrub gorse (Ulex europaeus), species that are widespread in pasture and wasteland, increase in importance. Within an individual beach, compositional variation among microsites reflects substrate stability and texture.

Shingle beaches are prone to invasion by numerous exotic herbs, grasses, and shrubs, especially when adjacent to urban or agricultural areas. When adjacent to agriculture, landward areas are particularly vulnerable to fertilising and grazing. Many have been planted with exotic trees. Rabbits and hares may be locally abundant. Where accessible, roads and tracks are often built along them and 4WD vehicles can be especially damaging to the low, scattered vegetation.

Shingle beaches are particularly susceptible to long- term damage from marine oil spills because they capture and hold oil for longer than sandy beaches.

Vegetated shingle beaches occur in many coastal areas, and are particularly abundant on the North Island and South Island east and south coasts.

Randall RE 1992. The shingle vegetation of the coastline of New Zealand: Nelson Boulder Bank and Kaitorete Spit. New Zealand Journal of Geography 93:11-19.

Found it! One of our tiniest coastal native plants! (Dune Restoration Trust)