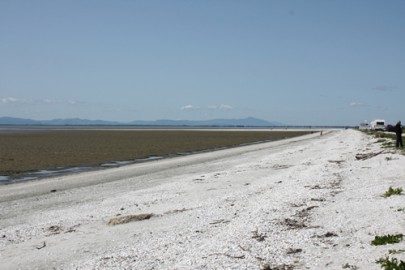 A shell barrier beach is a prograded coastal plain comprising shell fragments and coarse sand that is moved by longshore drift and carried landwards through wash action to form bars on the foreshore (Woodroffe et al. 1983). They are globally rare. The largest in New Zealand, at Miranda, is the only one in the world still aggrading. The shells are mainly those of little neck clams (Austrovenus stutchburyi), but other molluscs may be present. Shell barrier beaches would once have supported small-leaved shrubs such as salt marsh ribbonwood (Plagianthus divaricatus), mingimingi (Coprosma propinqua)and mānuka (Leptospermum scoparium), but these have mostly disappeared.

Direct human impacts include drainage, pastoral development and stock damage, and shell extraction in some areas. This high level of disturbance and removal of native vegetation has allowed exotic weeds to pose a serious threat. At Miranda, less than 10% of native vegetation remains and most areas are dominated by numerous exotic herbs and graminoids of which saltmarsh sedge (Carex divisa) and saltmarsh rush (Juncus gerardii) are prominent. Because of the abundance of exotics in these ecosystems, they are the first plants to colonise newly formed bare shell banks. Additionally, demand for coastal property poses a threat to shell barrier beaches around Auckland. Indirect threats include water quality deterioration, sediment deposition and nutrient loading caused by river discharges and unsuitable farming practices (intensive stocking, lack of fences) in the catchment.

Merrett M, Clarkson B 1997. Vegetation survey of the foreshore from Miranda to Kaiaua. Report prepared for the Department of Conservation by the Waikato Botanical Society.