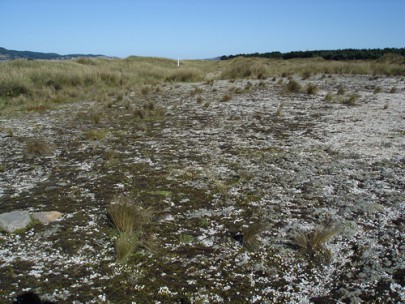 Dune deflation hollows are where wind has removed sand down to a level where a layer of particles too heavy for the wind to move (an armoured surface) stabilises the sand and prevents the surface being lowered further. They often form between a series of sand dunes and when the dunes move further inland they enlarge the terminal deflation hollow behind. Initially the hollows are colonised by small plants such as sand sedge (Carex pumila), Zoysia pauciflora, and remuremu (Selliera radicans) and then by progressively taller plants over time such as knobby club rush (Ficinia nodosa).This system may grade into damp sand plains where the water table is permanently near the surface. Dune deflation hollows can be the most species rich sites within the larger sand dune system.

The endemic dune snail (Succinea archeyi) occurs in this habitat. While not endangered, small butterflies in the genus Lycaena are common.

Dune deflation hollows are found in association with active sand dunes. They are particularly common in Northland, the western North Island from the Manawatu region to Wanganui, especially between the Manawatu and Rangitikei rivers where an extensive flat hinterland has allowed the dunes to spread inland, on Kaipara Peninsula, and on Kaitorete Spit in Canterbury, South Island. They also occur in Southland, on Stewart Island, and on Chatham Island.