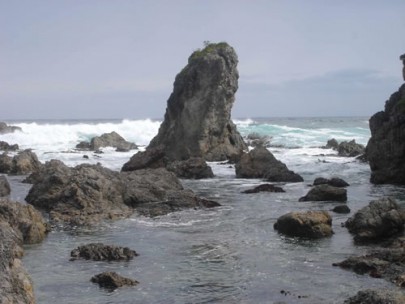 A coastal rock stack is an isolated pinnacle of rock off the coast, generally with steep to vertical sides (Priestly 1990). The bases of stacks occur below the high tide line. Some are always surrounded by water, others are surrounded by sand at low tide. Their summits are well above the high tide line and above the storm surge line (over 10m in height). In big storms, however, waves may crest over the tops.

Most coastal rock stacks are protected by their inaccessibility to humans. Weed invasion can occur, however, promoted by instability of cliffs and seed transport by wind and birds. Native plants, however, tend to dominate.

Coastal rock stacks are widespread in New Zealand wherever elevated topography abuts the coast, and absent only from long, sandy or shingly stretches like the central Bay of Plenty and South Canterbury Bight.