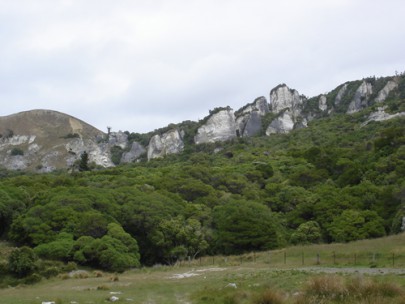 Coastal cliffs are very steep rock faces near the sea that are greater than 5 m in height. They may ascend in steps and have ledges, crevices and overhangs. Coastal cliffs may rise directly from the sea or be separated from it by a narrow shore. Calcareous rocks in New Zealand are primarily limestone and marble. Cliffs provide many varied habitats: from bare rock that can be colonised only by mosses and lichens to deeper soils supporting woody vegetation; from highly exposed situations to heavily shaded and sheltered habitats; and from very dry to permanently wet surfaces. Coastal cliffs are influenced by salt spray, particularly near their bases, with halophytes and succulents (e.g. Disphyma australe subsp. australe), silver tussock (Poa cita) and herbs (e.g. Einadia triandra) characteristic of these habitats. Woody plants are frequently stunted and wind-shorn and commonly include divaricating shrubs such as Coprosma species. Native species that have been lost from neighbouring habitats may find refuge on coastal cliffs.

Only a few weed species are present, e.g. stock (Matthiola incana), but others are approaching from urban centres (e.g. Senecio glastifolius). Farming practices do not threaten these systems, which are mostly too steep for sheep grazing, but goats can be a problem. Coastal cliff tops are desirable locations for dwellings near urban centres. As limestone is a softer rock, erosion, although it is a natural process, may be more of a problem than on coastal cliff types of harder rock types, such as granite. Most limestone mining is inland, so is not a threat to coastal calcareous cliffs. Increased erosion and inundation may result from climate change.

North Island coastal calcareous cliffs occur on Miocene sediments in eastern Wairarapa at Castle Point and at Cape Turnagain and parts of western Waikato from Port Waikato to Marokopa. South Island coastal calcareous cliffs occur in north Westland at Punakaiki, near the Heaphy River mouth, and in the vicinity of Whanganui Inlet; in south Marlborough near Flaxbourne Stream and elsewhere on the Kaikoura coast; and in North Canterbury at Motunau Beach and Napenape.