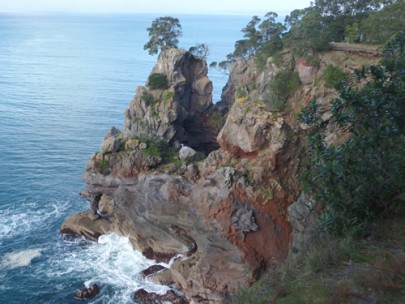 Coastal cliffs are very steep rock faces near the sea that are greater than 5 m in height. They may ascend in steps and have ledges, crevices and overhangs. Coastal cliffs may rise directly from the sea or be separated from it by a narrow shore. Basic rocks include basalt, andesite, diorite, gabbro, and tuffaceous mudstones and sandstones. Cliffs and outcrops provide many varied habitats: from bare rock colonised only by mosses and lichens, to deeper soils supporting woody vegetation; from highly exposed situations, to heavily shaded and sheltered habitats; and from very dry to permanently wet surfaces. Coastal cliffs are particularly influenced by salt spray, with halophytes and succulents, e.g. New Zealand celery (Apium prostratum), and New Zealand ice plant (Disphyma australe) characteristic of these habitats. Woody plants are frequently stunted and wind-shorn and commonly include the climber wire vine (Muehlenbeckia complexa), golden ake ake (Olearia paniculata) and mingimingi (Coprosma propinqua).

Naturally uncommon spotted shags (Stictocarbo punctatus) nest on cliff ledges. Although not threatened, sooty shearwaters (Puffinus griseus) attempt to breed on Banks Peninsula but are preyed upon. Spotted skinks (Oligosoma lineoocellatum) and 'Canterbury geckos' (Hoplodactylus aff. maculatus) would have occurred on the mainland cliffs but in the coastal zone are now confined to off-shore stacks.

Weed invasion is a serious threat. For example the hills behind Sumner (Christchurch) are dominated by weeds including, gorse (Ulex europaeus), ice plant (Carpobrotus edulis), pig's ear (Cotyledon orbiculata), boneseed (Chrysanthemoides monilifera), and Chilean rhubarb (Gunnera tinctoria). Livestock may graze the cliff tops, but apart from goats, they pose no serious threat because most areas are too steep for grazing. Coastal cliff tops are desirable locations for dwellings near urban centres. Erosion (although it is a natural process), combined with subsequent invasion by weeds, may be a problem for native species.

In the North Island, basic coastal cliffs occur on the eastern coast of Northland; at the entrance to Whangarei Harbour; between Muriwai and Karekare; west of Auckland, and on islands in western Coromandel. In the South Island, they occur on the Otago Peninsula, the Catlins coast, and Banks Peninsula.