The arboreal Mahoenui giant wētā (MGW) once lived in the epiphytes of tall tawa forests of the King Country and Waikato and is considered taonga by the local iwi. Predation pressure from introduced mammals means that the Mahoenui Giant Wētā Scientific Reserve (MGWSR), near Mahoenui in the King Country, now contains the only remaining natural population of MGW. The giant wētā appear to have survived at the reserve because the spiky introduced woody shrub, gorse, has provided protection from mammal predators. In addition, feral goats and cattle browse the gorse, creating a refuge for MGW in the dense foliage. Since the 1980s MGW have been translocated to a number of other locations but have only established at two sites (Mahurangi Island and Warrenheip) and are establishing at one site (Maungatautari) where mammals are in low densities or absent. However, there is a level of uncertainty about whether these translocated populations can persist.

MGW have been monitored annually at the MGWSR to assess population trends since 2004. The MGW population appeared stable until 2012, when fewer were detected and the search time required to find MGW increased. This decline has continued, and in 2016, with concerns being raised for the long-term survival of MGW at the MGWSR, a review of MGW management led to the formation of the DOC MGW Advisory Group, which triggered a collaborative research project to investigate pressures on MGW in the reserve. This research was led by DOC in collaboration with Victoria University of Wellington and Manaaki Whenua – Landcare Research (MWLR).

As part of the research project, survival rates from radio-tracking studies in native and gorse vegetation revealed that MGW inhabiting native vegetation were nine times more likely to be preyed on than those in gorse. MGW are primarily vulnerable to predation by rats, and the dense, young gorse that provides protection from this pressure is becoming less common due to natural vegetation succession processes, fewer goats browsing on the gorse, and the impact of gorse mites. This habitat change continues despite browsing from some goats and cattle, which is encouraged in the MGWSR to try to maintain the gorse dominance and preferred gorse habitat. 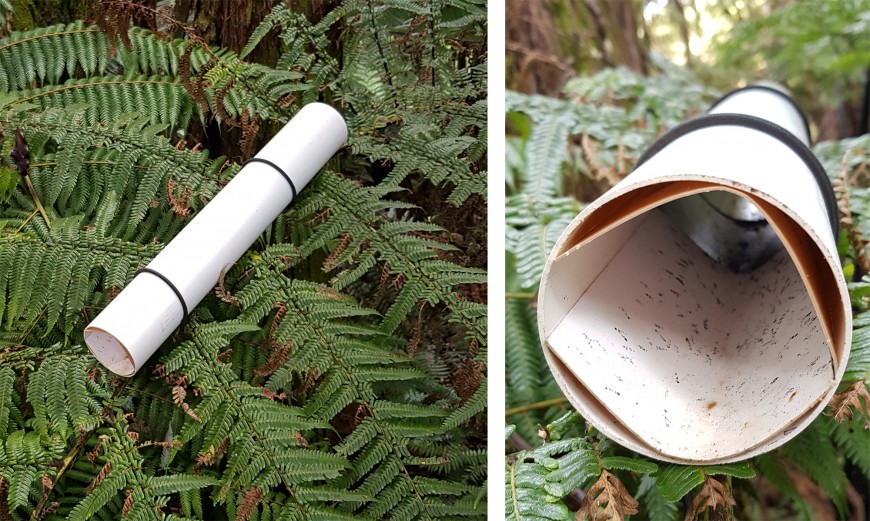 Left: Round tunnel (length 50 cm, diameter 8 cm) tested for detecting Mahoenui giant wētā in vegetation at Warrenheip.
Right: Two inked tracking cards (with adult MGW prints present) are rolled around the inside of the tunnel.

In addition to radiotelemetry studies, four mammal pest species (ship rat, mouse, feral cat, and possum) were trapped at MGWSR and their stomach contents analysed to identify potential predators of the MGW. Wētā were the most common invertebrate eaten by ship rats but, using conventional techniques based on morphology, only a few remains were able to be identified to species level. Wētā were also found in some mouse stomachs, while possums consumed wētā less often. The development of novel DNA barcoding techniques has the potential to identify invertebrate prey from mammalian stomach contents. We used these techniques to identify prey fragments extracted from ship rat stomachs as cave wētā (99% accuracy) and possibly MGW (73% sequence identity).

Maintaining suitable gorse habitat within the MGWSR to protect MGW is not feasible due to the practical and legislative difficulty of managing a goat herd and the presence of gorse mites. Gorse habitat is also vulnerable to fire, which is exacerbated by the effects of climate change. Instead of working to maintain gorse to protect MGW from predation, DOC, in consultation with local iwi, began rodent control in 2019, and in 2020 a network of traps was established to target mustelids, hedgehogs, and feral cats. Predator abundances are monitored using a network of tracking tunnels and game cameras. In addition, an iwi-led exploration of the possibility of funding a predator-proof fence is under consideration as a precautionary principle. MGW have a 2–3-year lifecycle, so any positive effects of the pest control on MGW abundance would most likely become evident after several generations (i.e. 5–6 years later). It is therefore imperative that the MGW population be monitored using an effective technique to enable the effectiveness of this new management regime to be evaluated.

The current method of MGW monitoring involves searching vegetation in plots. However, as the young dense gorse becomes tall ‘old man’ gorse and eventually succeeds to native vegetation, searching becomes ineffective at detecting MGW. In addition, large areas of the MGWSR are now already dominated by native vegetation and cannot be surveyed for this reason. 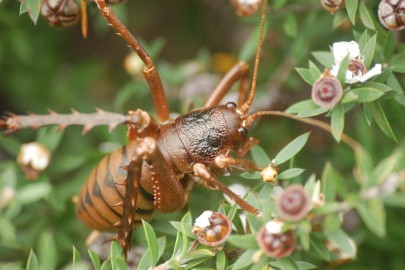 Footprint tracking tunnels are routinely used in New Zealand to both detect and monitor populations of small mammals, but they also record other animals, including insects. Wētā leave distinctive and easily recognised footprints on tracking tunnel cards, and these are now routinely used to monitor wētā, particularly giant wētā with their larger footprints. In 2019 a small trial of ‘round’ tracking tunnels (originally developed for monitoring mice up trees) to detect MGW in native regenerating vegetation was instigated at Warrenheip, a 16 ha forested, pest-fenced sanctuary near Karapiro, Waikato, with a translocated population of MGW. The round tracking tunnels were successful (mean tracking rate = 54%) for detecting adult MGW within native forest where vegetation is greater than 2.5 m in height. However, juvenile MGW footprints were difficult to distinguish from other wētā species present (e.g. Auckland tree wētā). Round tracking tunnels are currently being trialled by DOC to monitor MGW in gorse and native vegetation at the MGWSR and potentially provide a robust method to detect MGW in native vegetation and more efficiently in gorse.

The recent research carried out has greatly increased our knowledge of MGW. By combining research with management actions, we anticipate an increase in MGW population densities in the MGWSR and that MGW will be sustained in the long term, both there and at the translocated population sites.

This research was led by DOC in collaboration with MWLR (funded by DOC and Strategic Science Investment funding from the Ministry of Business, Innovation and Employment) and Victoria University of Wellington.