Since about 2005, Graham Nugent, Bruce Warburton and others have been trying to locally eliminate possums using aerial 1080 baiting.

Back then, Residual Trap Catch Indices (RTCIs, a measure of possum relative abundance) of zero were sometimes recorded after 1080 operations. The initial work was funded by New Zealand’s bovine tuberculosis (TB) management agency (now called OSPRI) and sought to determine whether it was feasible to reliably achieve 100% kills of possums within an area. For OSPRI, that would have immediately eliminated TB infection in possums. Once TB freedom had been achieved, management would no longer need to maintain zero possum density (by preventing reinvasion). The term ‘local elimination’ was therefore coined to distinguish the ‘temporary reduction to zero density for TB freedom’ from true eradication, which requires not only achieving zero density but also preventing any reinvasion.

By 2010 it had become clear that it was much harder to achieve zero possum density with a single application of 1080 bait than previous monitoring results had suggested; the 0% RTCIs from the early 2000s appeared more likely to have been low-precision sampling errors rather than true zero densities. At large scales there were always some surviving possums, even with double pre-feeding with nontoxic bait, improved bait quality and size, and (by modern standards) high sowing rates.

New work on local elimination began in about 2015, initially again by OSPRI for TB eradication but then also by Zero Invasive Pests (ZIP) and other groups involved in managing pests as part of the burgeoning Predator Free 2050 initiative. The new idea was to use two applications of 1080 bait in quick succession rather than just one (called ‘1080 to zero’ by ZIP and ‘dual 1080’ by Manaaki Whenua). A small-scale 2016 field trial by Graham, Bruce, and Grant Morriss at New Creek on the West Coast showed that possums that survived an initial 1080-baiting with standard RS5 cereal baits were all likely to have developed a learned and generalised aversion to anything that looked like a cereal bait As a result, a second application of 1080 with a slightly different cereal bait killed only some of the survivors, despite the area being prefed twice with the different form of non-toxic bait. Possum survivors of dual 1080 baitings have also since been detected in large-scale operations in 2019 in the Kaitake Range (Taranaki Mounga) and in the Perth River (ZIP, Westland).

Although the survivors at New Creek were shy of cereal bait, many of them did eat peanut butter that had been deployed in chewcards used to monitor their abundance. That prompted Graham and Bruce to explore whether switching to a completely different bait base for the second application of 1080 bait might achieve local elimination – specifically, a peanut butter paste (PBP) bait deployed in paper bags nailed to trees. At a site near Rotorua, possums in three blocks were radio-collared and a different dual 1080 treatment was applied to each. 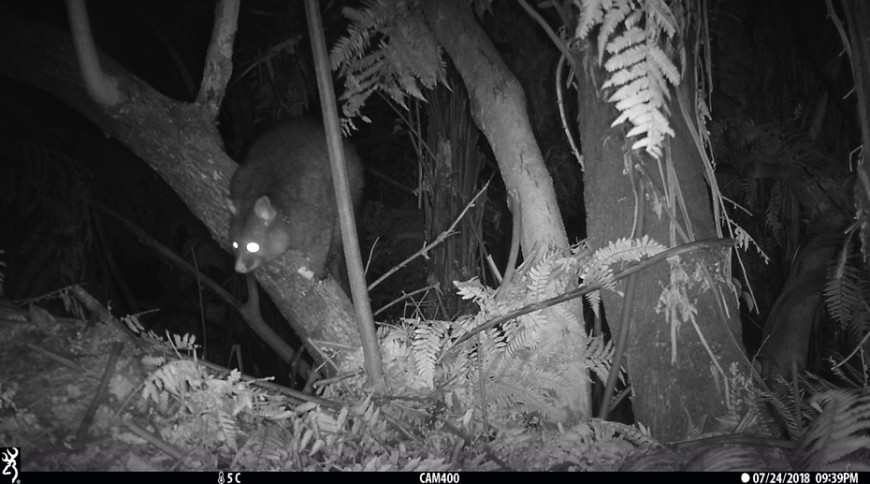 Trail camera-monitoring for bait aversion. The possum is investigating but not eating a non-toxic cereal bait nailed to a tree.

The initial RS5 1080 baiting killed 81% of the 134 radiocollared possums present (75-87% depending on block). Trail cameras deployed after the 1080 baiting to monitor possum interactions with a non-toxic cereal bait nailed to a tree recorded 31 visits by radio-collared possums. No cereal bait was eaten during those visits by radio-collared possums, confirming that most, if not all, survivors had eaten cereal bait but survived through a learned aversion to that bait type. The second 1080 baiting, this time with PBP, killed 22 (92%) of the remaining 24 possums. This included all of the 14 possums in the two blocks pre-fed with non-toxic PBP before the first (cereal) 1080 baiting. However, two of the 10 possums in the block that was pre-fed with PBP only after the first 1080 baiting survived. That result suggests that familiarising possums with the second form of 1080 bait before they encounter the first 1080 bait type is important – where that was done, 100% of radio-collared possums (n = 89) were killed. This suggests that dual 1080 baiting with different bait types has the potential to locally eliminate possums. 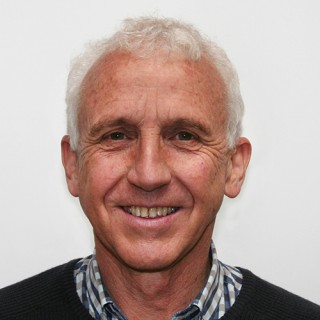