Satellite photography has long been a useful tool in land management, enabling landscape comparisons over time that show the large-scale effects of historical land-use decisions. Modern remote-sensing techniques use all parts of the light spectrum and are very high resolution, and the data sets are updated every 5 days as satellites pass overhead. However, perfectly cloudless skies are rare, and even wisps of high cloud can distort and hide important details on an image. 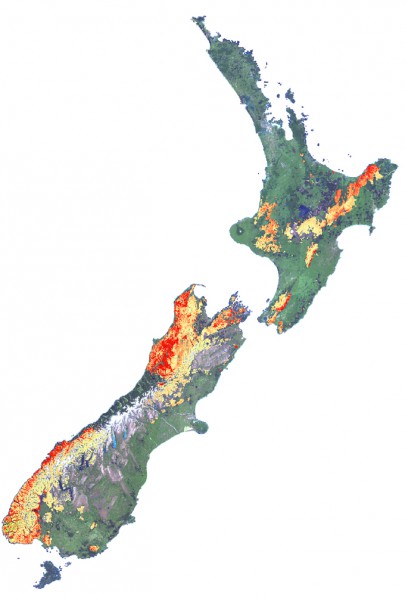 Manaaki Whenua’s James Shepherd and Jan Zorner have implemented a full cloud-clearing method for satellite images on one of New Zealand eScience’s high-performance computers in Wellington. The new method, run on the supercomputer known as Mahuika, is a big step forward in remote sensing, enabling scientists to efficiently clean and prepare large archives of satellite imagery, removing clouds and their shadows to create sharp topographical mosaics. The cleaned images allow analysis of landscape and vegetation changes over relatively short time scales, including patterns of crop flowering and growth, soil erosion and forest health. These data are an underpinning resource to enable other researchers to measure and manage New Zealand’s land resources, including the environmental impacts of land use.

The cloud-clearing method is especially significant for the Advanced Remote Sensing of Aotearoa programme, which is dependent on these methods to produce improved maps of vegetation through the analysis of time-sequenced data. A new proposal submitted to MfE has been funded to allow our remote-sensing team to complete the fifth version of the New Zealand Land Cover Database (LCDB). The LCDB is a digital map and multi-temporal thematic classification of New Zealand’s land cover, with 33 mainland classes of landscape (35 including the Chatham Islands). The new information will be a significant addition to the database, which has not been updated since the fourth version of LCDB was released in 2014.

This year a new remote-sensing method has also been developed to identify when beech trees flower. This work is especially useful to predict the likelihood of prolific seed seasons known as beech masts. As part of the Advanced Remote Sensing of Aotearoa programme, our researchers have found that in the visible spectrum, red flowers add to the green leaves to produce a distinct yellowing of the canopy. The degree of yellowing can be assessed from the index (red-green) and used to estimate the density of flowering, which can then be further related to seedfall density. Combining this technique with the cloud-clearing method allows patterns of forest canopy behaviour, including the unusual beech mast signal, to be seen clearly.

DoC has provided their national beech seedfall data set to enable these relationships to be investigated fully. If the relationships are strong, it may be possible to produce a national map predicting autumn seedfall for DoC. This could be a major strategic step forward in national pest control work, over and above traditional methods of estimating and predicting beech mast and subsequent rodent increases, especially in very remote areas of the country that are almost impossible to sample or measure on the ground.