The carbon contained within soils is critical for soil health and ecosystem functions, such as the maintenance of soil structural stability, root growth, air/water movement, and nutrient cycling. It plays an important part in the control of rainwater run-off and soil erosion, and is a vital food source for soil biota. Soils with higher carbon are generally more resilient to climatic extremes of intense rainfall and drought. 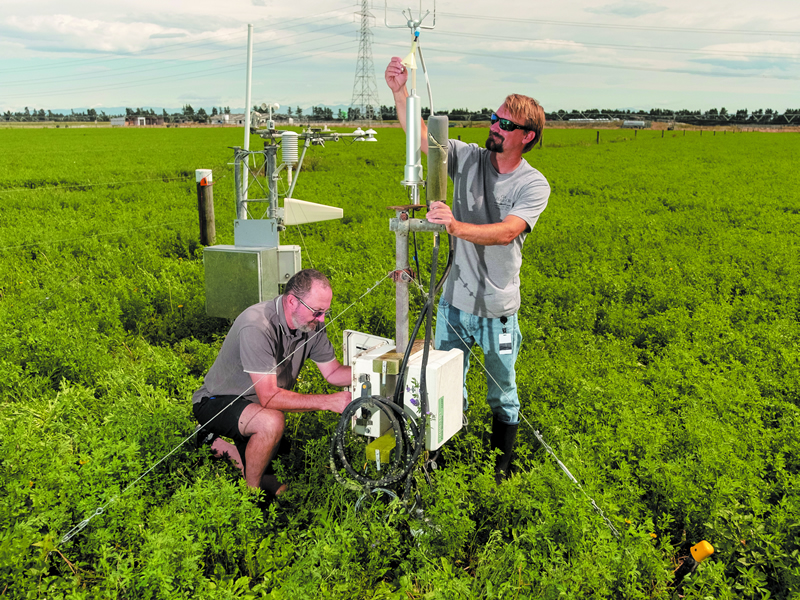 To test the relationship between soil respiration and climate warming, we used different carbon isotopes in soils to measure the rate of turnover of soil organic matter in situ over time. We studied soils under crops and compared them with soils with no roots present (in root exclusion plots).

This work has shown that root respiration processes increase in response to climatic warming, with associated increases in carbon release, but that the turnover of carbon contained within the soil itself remains very stable – an important challenge to current modelling assumptions of how soils will respond to a warming climate.

In other work, in collaboration with Lincoln University, Plant & Food Research, Scion and the University of Canterbury, our researchers have been using unique paddock-scale facilities to measure carbon and water inputs and losses and leaching losses from large lysimeters, and have been able to calculate annual gains and losses in carbon, water and nitrogen.

Results in the first year showed that irrigated lucerne was carbon-neutral. In the second and third years carbon losses exceeded carbon uptake, resulting in losses of up to 3% of total soil carbon. In the fourth year the irrigated site continued to lose soil carbon while there was a small net gain at a non-irrigated site.

The findings highlight the need for alternative cutting or grazing management to avoid carbon losses, at least during the years following establishment of the crop regime.

Nitrogen leaching losses also occurred both with and without irrigation, but they were much greater at the irrigated site, indicating that irrigating with effluent is not a good management practice for lucerne on stony soils.

David Whitehead and colleagues at Manaaki Whenua also published a paper on management practices to reduce losses or increase soil carbon stocks in temperate grazed grasslands, using New Zealand as a case study. The paper, in the journal Agriculture, Ecosystems & Environment, synthesised 8 years of research findings from the New Zealand Agricultural Greenhouse Gas Research Centre Soil Carbon programme. There is now firm evidence that soil carbon stocks under grazed grasslands on flat sites are decreasing, and changes to management practices are needed to slow or reverse this trend.