If it weren’t for the mice, then caterpillars, spiders, wētā, beetles and even earthworms would be abundant in Aotearoa New Zealand’s ecosanctuaries.

This is the finding of Manaaki Whenua researchers Corinne Watts, John Innes, Deborah Wilson, Danny Thornburrow, Scott Bartlam, Neil Fitzgerald, Mark Smale, Gary Barker, and Mahajabeen Padamsee, who recently published their research in the New Zealand Journal of Ecology on the impacts of house mice in an ecosanctuary.

House mice are one of the most widespread invasive mammals on the planet, owing to their rapid population growth rate, varied flexible diet, and close association with humans. While larger predatory mammals keep mouse numbers in check, in areas where mice have no other predators and there is abundant food, populations can rapidly increase and cause substantial damage to the biodiversity of the area. 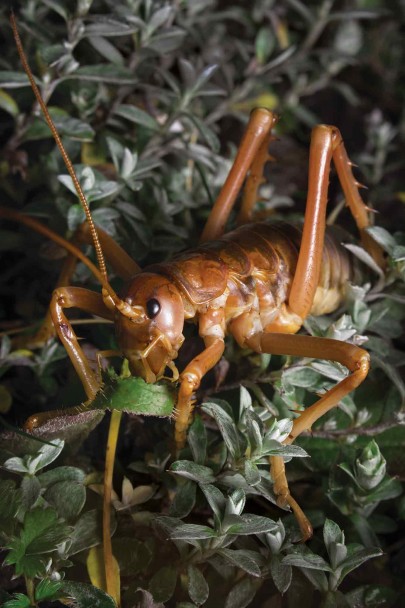 Aoraki/Mount Cook giant wētā (Deinacrida pluvialis) feeding. This species has declined dramatically across most of its range and is now only known in
good numbers at a single location.. Image: Samuel Purdie

Over 5 years, researchers examined the impacts of mice alone on biodiversity at Sanctuary Mountain Maungatautari south of Cambridge, Waikato, by comparing two independently fenced forest blocks, one with relatively high numbers of mice (up to 46 mice per hectare) and one where mice were almost undetectable.

Midway through the project, the treatments were reversed. Mice were eradicated from the first site, and allowed to increase on the other. During the project, 42,639 invertebrates were caught in pitfall traps and tracking tunnels were used to detect the footprints of wētā.

The researchers found strong evidence that mice reduced the abundance of ground-dwelling invertebrates, in particular caterpillars, spiders, wētā, and beetles, and reduced the mean body size of some taxa. In addition, earthworm abundance, biomass and species richness increased as the mouse population decreased in one study block.

But it wasn’t all good news, as invasive earthworm species made a faster recovery in abundance and biomass compared with native species.

Mice are also a nuisance in ecosanctuaries, because as well as being predators they interfere with monitoring and pest control devices targeting other species. They potentially create burrows that jeopardise pest fence integrity, and attract other predators into the ecosanctuary.

Lead author Dr Corinne Watts says while the primary object of restoration in Aotearoa New Zealand ecosanctuaries is often to restore pre-human ecological interactions and processes as much as possible, it is not about increasing the abundance of all taxa. “Overall, there is substantial biodiversity gain from eradicating the full suite of pest mammals despite mice remaining afterwards. Mice may be catastrophic, however, in ecosanctuaries that focus on the recovery of lizards (e.g. Otago skinks) or invertebrates (e.g. wētā). Nevertheless, we look forward to improvements in mouse control tools to enable the future eradication of mice from large, rugged forest reserves such as Maungatautari.”