Getting smarter about sediment control

New Zealand is losing 192 million tonnes of soil each year due to erosion, the equivalent of more than 7 million dump-truck loads. 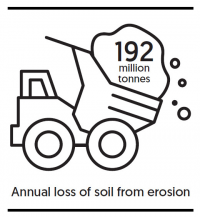 Annual loss of soil from erosion

According to the Ministry for the Environment’s Environment Aotearoa 2019 report, almost half (44%) of this loss is from pastoral land. Accelerated by the loss of native vegetation, heavy rain causes landslips, slumps and streambank collapses, all of which send huge amounts of fertile soil and sediment into waterways.

The land-based erosion and transfer of sediment is a huge problem for New Zealand. It doesn’t just reduce land productivity – it also affects water quality. Fine sediments are the most common cause of contamination in New Zealand’s rivers and estuaries. Too much sediment in rivers, lakes, and coastal environments can smother freshwater and marine habitats. Sediments can carry other pollutants, such as heavy metals, nutrients and microbes. Sediment also hampers the growth of aquatic plants and animals, and sediment-choked waterways increase the risk of flooding in towns and cities.

Now, a five-year MBIE-funded programme, ‘Smarter Targeting of Erosion Control’ (STEC), is exploring cost-effective ways of targeting erosion control and improving water quality. The programme aims to find ways to slow erosion damage, and to better understand sediment origins and volumes, what type of sediments are produced, and by which processes. STEC is led by Chris Phillips and Hugh Smith from Manaaki Whenua, in collaboration with researchers from NIWA, Massey University, Waikato University, and an international research network. The programme also partners with Whanganui iwi (Tamaūpoko community group) and Rangitāne o Manawatū.

Extensive earthflow in the upper Tiraumea catchment, a tributary of the Manawatū River

STEC researchers are working on farms to learn more about effective erosion management techniques. The STEC programme is sampling in four river catchments across New Zealand to collect data for building new modelling tools: the Manawatū, Whanganui, Oreti in Southland, and Wairoa near Auckland. Researchers have recently collected samples from erosion sources in the Oreti River catchment. “These sampleswill provide new data about the source soils contributing sediment to the river network and affecting water quality,” says Smith. “The soil samples will be used to ‘fingerprint’ the sources of sediment in the Oreti River, in collaboration with NIWA researchers, who will collect suspended sediment samples at their river gauging stations.” “We have also made the first set of measurements of the rates at which earthflows are moving in the upper Tiraumea catchment, a tributary of the Manawatū River. This work is based on a network of survey pegs installed in each earthflow. Initial data show earth movements of up to 8 metres in one year,” he adds.

The models created from STEC will indicate how sediment – in particular fine sediment – moves through catchments. It will link erosion on the land to sediment transport and instream water quality, ultimately enabling more effective mitigation of sediment issues downstream.

In other research linked to soil erosion control, Manaaki Whenua researchers have also recently completed a temporal analysis of Sentinel-2 satellite imagery to show the amount and persistence of all agricultural bare ground in New Zealand hill country over a typical winter, and to identify and map those hill country pasture and winter forage crop paddocks that were heavily grazed over the winter of 2018 and 2019.

Most paddocks identified as potentially at high risk of soil erosion were in Southland, Otago and Canterbury. Results have shown that 700,000 tonnes of soil were eroded from bare ground over the 2018 winter in New Zealand, and this information has been used to help develop the new National Environmental Standards for Freshwater.