An application to release the privet lace bug, Leptoyphya hospita (Tingidae) was approved by the EPA in May 2015. This is the first of what is expected to be several proposed biocontrol agents that will work together to help control privet weeds in New Zealand.

The application and decision can be accessed on EPA's website.

This application was submitted by Waikato Regional Council, acting on behalf of the National Biocontrol Collective, a consortium of regional councils and the Department of Conservation. The Collective funds the development of weed biocontrol programmes in New Zealand. Landcare Research is the science provider for this development.

Privet is also considered to be a serious weed in the USA, and the lace bug is being considered there as a biocontrol agent. Landcare Research has been able to take advantage of research already completed there. Landcare Research contracted Richard Hill & Associates to prepare the application and to manage the application process on behalf of Waikato Regional Council, including pre-application consultation with EPA and with Māori and other stakeholders.

There are two privet species that are significant weeds in New Zealand. Both are native to China, and were introduced as ornamentals and as hedging plants. The control agent will attack both. Chinese privet (Ligustrum sinense) was first recorded in the wild in New Zealand in 1950, but is now present from Nelson northwards. It grows to about 5m tall. It is shade-tolerant and readily invades sensitive areas such as bush remnants, forest margins and riparian areas. Local research indicates that the presence of Chinese privet reduces biodiversity in invaded areas. Tree privet (Ligustrum lucidum) grows to 10 m tall and was first recorded as naturalised in 1958. It is present from West Coast northwards.  It can also grow under, and displace native vegetation (see image). Both species flower prolifically in spring and the scent of the flowers from both species is thought to aggravate allergies. Both species are dispersed when birds eat the fruits.

For more information on privet see:

The privet lace bug is the first of several biological control agents that will be considered for introduction, each attacking a different part of the plant to collectively reduce the pest status of privet. It feeds on the leaves of the plants, causing defoliation when present on large numbers.

The potential risks, costs and benefits of the proposed introduction to New Zealand of Leptoypha hospita and the possible reduction in the abundance and vigour of privet have been identified by literature review and by consultation with stakeholders. The significant effects identified (highlighted in bold) will be addressed in details in the application:

It is forbidden to sell, propagate or distribute either privet. They have no significant economic or environmental value. Potential benefits of biological control would be the mitigation of the effects described above. The key possible adverse effects of introducing the lace bug will be addressed fully in the application:

Privet belongs to the olive family. There is only one native genus in this family, but several related species have ornamental or economic value in New Zealand. The application will present evidence to show that native plant species and olives would not be at risk. The closest relative to privet growing in New Zealand is lilac (Syringa spp.). This is will not be a primary host for the lace bug, but might be susceptible to incidental damage where privet is common nearby.

Because the lace bug is almost completely host specific, population densities capable of interacting significantly with other plants or animals will only be found in close proximity to privet. As a result, no significant disturbance of ecological relationships is expected in New Zealand. The presence of privet itself massively modifies natural interactions between species, and any reduction in the weed will help reverse those impacts. Privet is unlikely to be a major part of the diet of native birds.

Applications to introduce control agents against seven weeds will be submitted over the next 18 months. The members of the EPA 's national network Te Herenga will be contacted in August 2014, and invited to enter dialogue on the National Biocontrol Collective's plans to apply to EPA to introduce biological control agents to attack these weeds.

The message to Te Herenga will describe how the applicant intends to assess the risks, costs and benefits associated with the proposed introductions. Members will be invited to identify any issues that they would like to be addressed in the applications.  In order of application, the target weeds are privet, Japanese honeysuckle, moth plant, lagarosiphon water weed, old man’s beard, wild ginger and field horsetail. Three targets (Japanese honeysuckle, moth plant, old man’s beard) have been the subject of previous successful applications, and consultation was completed in each case. The outcome of previous consultations will be presented.

The responses by Te Herenga members specifically related to the proposed introduction of privet lace bug is summarised here:

The responses these organisations specifically related to the proposed introduction of privet lace bug are summarised here:

The results of host range testing conducted in USA and New Zealand on privet lace bug will be fully discussed in the application. Zhang et al. (2012) produced a report on the fundamental host range of the privet lace bug. Tests of several additional genera of particular interest in New Zealand were completed in the Beever Containment Facility located at Landcare Research, Auckland. A report has been compiled by Dr Q Paynter, Landcare Research that discusses host plant selection, and the test results from USA and NZ. This report can be found here:

The unpublished reports by Zhang et al. (2012) and Paynter (2014) will be peer reviewed and that review will be provided to EPA.A survey of the invertebrate fauna and fungi associated with privets in New Zealand was carried out between July 2009 and May 2012 by Landcare Research for regional councils and the Department of Conservation.

The feasibility of biological control of privet in New Zealand was investigated for several Regional Councils. 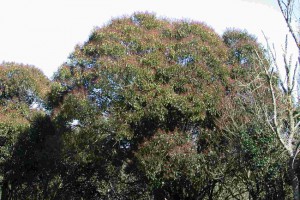