Removal of seed sources has been recommended as a priority for Darwin’s barberry management. Therefore Environment Southland proposes the introduction ofa Chilean flowerbud-feeding weevil (Anthonomus kuscheli) and a Chilean seed-feeding weevil (Berberidicola exaratus). The aim is to reduce the number of seeds available for dispersal by birds. This will reduce the rate at which satellite populations of Darwin’s barberry are establishing across the landscape. The bud weevil will reduce flower and fruit production, and the seed weevil will destroy seeds that escape the bud weevil. The effects of the agents will be additive because reduction in fruit production by A. kuscheli is likely to reduce the resource available to B. exaratus, increasing the proportion of seeds attacked within each fruit.

You can view the decision and the application documents on EPA's website.

This application was submitted by Environment Southland, acting on behalf of the National Biocontrol Collective, a consortium of regional councils and the Department of Conservation. The Collective funds the development of weed biocontrol programmes in New Zealand. Landcare Research is the science provider for this research. Landcare Research commissioned Dr Hernàn Norambuena (initially of Instituto de Investigaciones Agropecuarias, Chile) to conduct research in Chile to determine if the weevils would be suitable to release in New Zealand. Landcare Research have contracted Richard Hill & Associates to prepare the application and manage the application process on behalf of Environment Southland, including pre-application consultation with EPA, Iwi, hapu and other stakeholders. 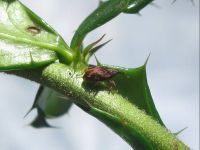 Darwin’s barberry (Berberis darwinii) comes from Chile. It first became established in New Zealand in 1946 and is now common from central North Island to Stewart Island. There are relatively few major infestations but it is a future threat to environmental and economic values throughout the country as it is still spreading. Darwin’s barberry is a 5 m tall spiny shrub with deep orange-yellow flowers in January to December, followed by abundant purplish-black berries (Roy et al., 2004). Blackbirds and other species feed on fruits and then drop seed at a distance from the seed source, founding satellite populations.

Darwin’s barberry occupies grazing land in the same way as gorse does, and can displace native plants in bush remnants. The weed can aggressively invade forest margins and light gaps in disturbed or remnant forest. It overtops the margins and understory of patchy remnant forest, destroying low-growing native plants that should grow in such areas, including seedling forest trees. It is a threat to the ecological and biodiversity values of reserved land managed by DOC, regional councils and other organisations. It is seen as a major threat in Rakiura National Park where an eradication campaign is in progress. Considerable investment occurs annually just to maintain damage at current levels.

The potential risks, costs and benefits of the proposed introduction to New Zealand of Anthonomus kuscheli and Berberidicola exaratus and the possible reduction in the abundance and vigour of Darwin’s barberry were identified by literature review, by public consultation and by formal brainstorming involving personnel from Environment Southland and the Department of Conservation. The significant effects identified (highlighted in yellow) are addressed in section 6 of the release application.

A total of 169 iwi, hapū, and Māori organisations and individuals making up the EPA Māori National Network were contacted on 9 December 2011 and invited to enter dialogue on the proposal to introduce Berberidicola exaratus and Anthonomus kuscheli. The message described how the applicant intended to assess the risks, costs and benefits surrounding the proposed introductions in the application, and respondents were asked to identify any issues that were inadequately, or not covered in those plans. Recipients were given the option of responding by form letter (a stamped addressed envelope was included), email or by phone. The main beneficial and adverse effects identified here and those identified in previous consultations are addressed in the application form. Te Ao Marama (Southland) was informed of the proposal and agreed to discuss the issue, but suggested that the Ngai Tahu HSNO komiti take the lead on this response. All organisations consulted will be informed when the application has been submitted and is open for public submissions.

Safety issues are paramount in the minds of biocontrol of weeds researchers. Researchers rigorously test all proposed agents to assess the risk of damage to non-target plants. A set of procedures was developed to help researchers choose a suitable shortlist of test plants, and this methodology is now well-accepted internationally (Wapshere, 1974). The technique is under constant review to update best practice (e.g. Sheppard et al., 2005; Briese, 2005).

The results of host range testing conducted in Chile and Lincoln will be summarised in Tables 1-3 of the application. The unpublished reports on which that summary will be based (Norambuena & Escobar, 2010; Norambuena, 2011; Smith 2012) have been peer-reviewed by Dr Q. Paynter of Landcare Research, and that review has been provided to EPA.

Find the complete list of cited references relating to this application.