New Zealand has some of the highest densities of social wasps in the world. Their natural enemies are not present here, winters are mild, and there is an abundance of food for which they can out-compete our native insects and birds.

The negative impacts on biodiversity of wasps are very well studied in New Zealand. The research is also amongst the best of any invasive invertebrate in natural ecosystems from around the world.

Consequently, wasps are one of the best-known pests in New Zealand (Beggs 2001).

Most of the biodiversity research has been focused in the beech forests at the top of the South Island. However, there is also evidence of the negatives impacts of wasps from other native habitats. In semi-urban scrub and pasture habitats of the Hamilton area, Harris and Oliver (1993) found that wasps were responsible for 12 000–75 000 prey/ha/season. Gardner-Gee and Beggs (2012) recently showed that wasps were the most common visitors to the honeydew of kanuka trees in northern New Zealand, and suggested their abundance may have disrupted bird–honeydew associations. 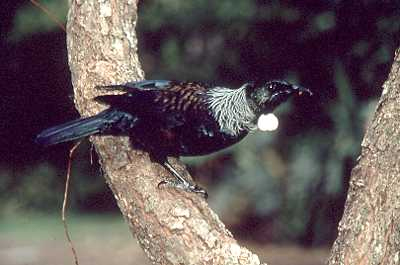 The behaviour of three native bird species (tui, bellbird, kaka) is known to be affected by wasps removing honeydew.

Elliott et al. (2010) recently showed that several common and widespread bird species have had significant declines in their abundance of the last 30 years; attributable to the impacts of a number of introduced species, but especially wasps.

Tui spend over 80% of their foraging time on honeydew but reduce their feeding on honeydew or leave beech forest when honeydew falls below a threshold level (2500 J m-2).

Bellbirds remain in the forest on days when the standing crop of honeydew was low, but reduce their time spent feeding and on activities like singing, flying, social interactions and grooming.

The behaviour of kaka also changes when it became unprofitable for them to forage on honeydew.

Bandits of the Beech Forest

The devastating effects of introduced wasps in New Zealand, particularly on kaka is a serious issue. The horde of yellow and black marauders has left scientists struggling to protect animal and human victims. This documentary looks at the effect on the ecosystem of wasps, who compete with natives for honeydew and prey upon insects. 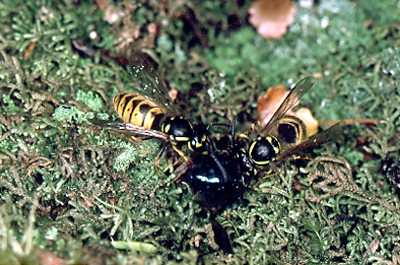 The predation rate of wasps on some invertebrate prey species is also so high that the probability of them surviving is close to zero (Toft & Rees 1998; Beggs & Rees 1999).

Wasps consume between 1.4 and 8.1 kg of invertebrates per hectare each season, depending on the density of wasps. German wasps carry heavier loads (5 mg) than common wasps (2 mg). 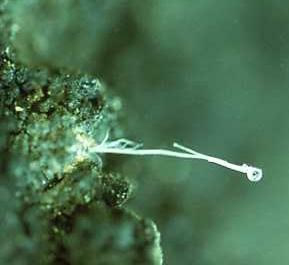 Honeydew on a filament.

Vespula wasps are most abundant in beech forests of the South Island, which are naturally infested with endemic scale insects that produce ‘honeydew’ (Beggs 2001).

Honeydew is produced by a native scale insect (similar to an aphid). The insect inserts its mouth-parts into the trunk of the beech tree to feed on the trees sap. The excess sap passes through the gut of the scale insect and forms a sugary droplet at the end of the insect. Wasps collect these droplets for food.

Wasps are able to carry loads of about 15 microlitres of honeydew at a time.

The honeydew-producing scale insects provide an energy-rich food resource for Vespula wasps. Wasps reduce the standing crop of honeydew by more than 90% for 5 months of the year and so compete with native species and honeybees that also consume honeydew (Beggs 2001).

Densities of wasps in these forests are typically 8–34 nests/ha (average 12/ha; Barlow et al. 2002). At their peak, there is an average biomass of 3.8 kg of wasps/ha (10 000 worker wasps/ha), which is greater than the combined biomass of birds and exotic rodents/mustelids (Thomas et al. 1990).

Wasps can affect nutrient cycling in the honeydew beech forest community by reducing the flow of carbon to micro-organisms in the phyllosphere and the soil, ultimately this could affect soil solution chemistry.