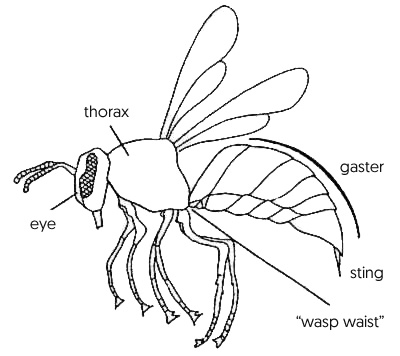 Wasps, bees and ants (the order "Hymenoptera") differ from other insects by having two pairs of wings that are linked by a row of hooks, and by having a narrow "waist" that joins the abdomen to the thorax. The first segment of the abdomen is fused to the back of the thorax, so the part behind is not the whole abdomen — it is more strictly called the "gaster".

Social wasps can be distinguished from the rest of the Hymenoptera by:

Most of the wasps in a nest are infertile female workers.

Queens, which are fertile females, look much the same as the workers, except they are about twice their size. They also have a sting.

The males (called drones) have long antennae which often curve backwards. Their gaster has seven visible segments and is more evenly-shaped and longer than that of the females, and they have no sting.

Common wasps are very efficient at harvesting honeydew have consequently displaced German wasps from honeydew beech forest. Common wasps collect honeydew at a faster rate than German wasps, and spend less time lapping honeydew (which has often fermented) from the trunk when the standing crop of honeydew is low, so that fewer of them become lethargic and less effective feeders. 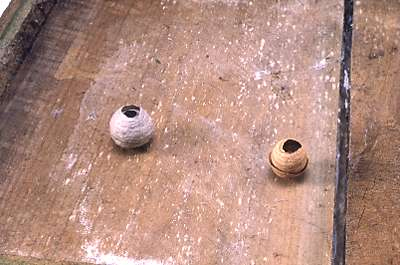 German wasp (Vespula germanica) nests are grey and made from the fibre of sound wood.

Common wasps (Vespula vulgaris) make their nests from the fibre of dead or rotten wood and are brown.

In New Zealand, German and common wasps are readily identified because there are very few other insect species which look similar. They could be confused with: