Life cycle of a wasp

Social wasps are one of the most complex animal societies known where all members of the nest co-operate. Workers help raise the offspring of the reproductive queen, but also collect food and defend the nest. 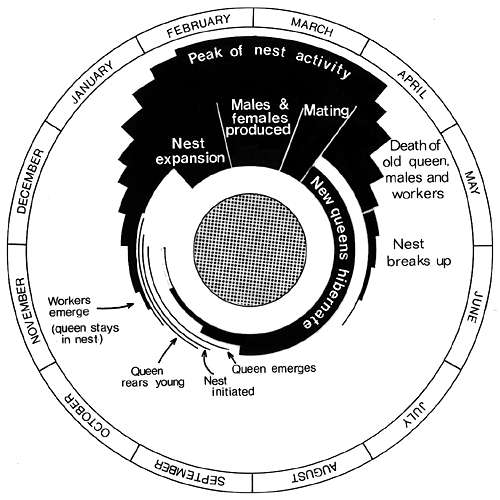 German and common wasps build nests of honeycomb-like cells, which are about the size of a soccer ball, but they can become much bigger if they survive over winter.

There are general components of the wasp lifecycle:

Sometimes another queen tries to steal the nest  instead of working to make her own. There are many prolonged fights between  queens for the ownership of nests. This is one of the reasons why a large  proportion of founding nests (where the queen is still working alone) fail to  become established. Also, cold, wet springs reduce the number of nest which  establish. Once the queen has five to seven worker wasps to help her, she stays  in the nest and lays eggs for the rest of her life. The nest then grows  rapidly, and the nest is likely to survive for several months.

Nest expansion and the workers 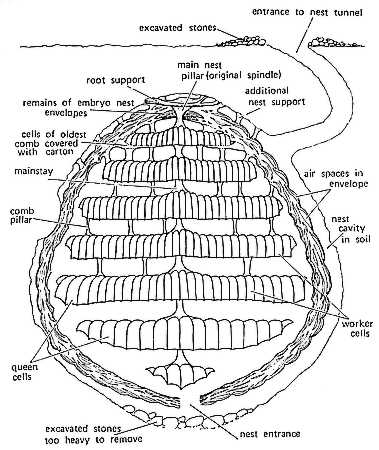 Successive layers of comb are added underneath the existing layers, so that the nest grows downwards. Sometimes as many as 20 layers of comb are formed, held apart by pillars just high enough to allow the workers to get in between to feed the growing larvae.

The nest envelope is extended to enclose new comb, and pockets formed within it trap air to insulate the nest and keep it warm. Wasp nests function at a temperature of 31°C.

For the first three or four days after they emerge, new worker wasps stay in the nest and help to feed the developing larvae. As they get older they perform different tasks, for example, leaving the nest to collect water and wood fibre to expand the nest. The water is used to carve out and enlarge the nest entrance. Wasps spit the water onto the area to be enlarged and mix it with the material to be disposed of to form pellets. The pellets are then carried from the nest.

After working on nest-building for a while, the worker wasps then switch to food gathering. They get energy from nectar or honeydew, and, protein from insects or dead animals.

Worker wasps have very few enzymes in their guts, so they cannot digest much of the food they gather. They bring the raw food into the nest and pass it to other workers who feed the hungry larvae. In return, the larvae release a creamy blob of predigested `soup' which contains all the sustenance the worker needs. This type of food exchange is called `trophollaxic feeding', and is a key part of the social contact between workers and the developing young.

On most foraging trips the workers gather food within a few hundred metres of the nest entrance, but they can make occasional journeys up to a kilometre away. Wasps may follow one another to good food sources, but they cannot tell one another about the location of foods, as bees do. They are also forced to feed in cold or rainy weather because they do not store honey or pollen like bees.

After a period of foraging for food, the worker wasps again turn to spending most of their time in the nest, this time as guard wasps by the nest entrance. Nearly all worker wasps die before they are 3 weeks old.

The workers are sterile female wasps. The queen releases a pheromone that blocks the reproductive development of the workers. If the queen dies, the workers start to develop ovaries within a couple of weeks, and can eventually lay eggs. The wasps that hatch from these eggs, however, are always males.

Production of drones and queens 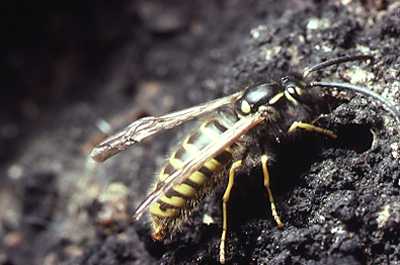 In late summer and autumn the wasp nest starts to produce fertile wasps, called 'gynes'. The males (drones) usually hatch from worker cells, and they appear about 2 weeks before the queens. Drones are fertile males that are only present in late summer or autumn.

Drones that have left the nest tend to gather around trees or prominent objects on high ground. They fly continuously back and forth around such objects, and rush in to mate with any queen that flies into the mating swarm. The male's sperm is stored by the queen within a small sac (called a spermatheca) in her reproductive tract until she needs it to fertilise eggs for a new nest in the spring. 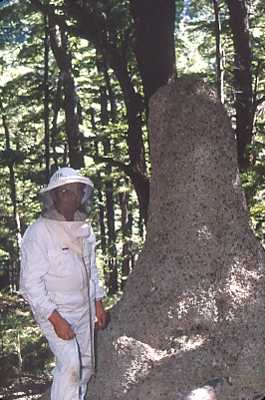 Once the queen has mated she goes to find a dark, dry place to hibernate for the winter. When the queens hibernate, they tuck their antennae neatly between their legs, and bite the substrate in order to hang on. Hibernation uses up very little of their stored fat, and most queens survive this resting period.

Most wasp nests die off in late autumn after the queens and drones have been produced. In New Zealand, about 10% of German wasp nests are able to survive the winter. When conditions improve again in spring, such nests already have a strong worker force and an existing nest structure. This means that they can grow very rapidly, and reach an enormous size by the end of their second autumn.

The largest German wasp nest ever found was about four metres high and contained about four million cells. In nests like these the original queen is replaced by several new queens to lay eggs in the second season.

Common wasp nests do occasionally survive the winter, but the overwintering nests found so far in New Zealand had not produced queens in their first autumn.