Economic and social impacts of wasps in New Zealand 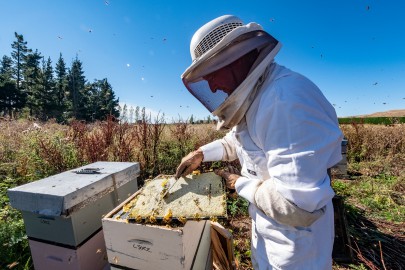 Checking out the health of a beehive. Image: Bradley White

Vespula wasps are a major pest of the beekeeping industry in New Zealand. They cause direct financial loss by robbing beehives of honey and by killing bees. They also require beekeepers to expend time and money in control procedures (Clapperton et al. 1989).

A nationwide survey of beekeepers in the 1974/1975 season by Walton and Reid (1976) found that 88% of beekeepers thought wasps were a nuisance. At this time they were considered to be a beekeepers’ single most important pest.

However, wasps also cause lost honey production and out-compete honeybees for honeydew resources. Both of these will also add up to very large economic costs, although such data has not yet been estimated.

Economic losses to orchards and vineyards in New Zealand are probably low, mostly because many crops are already harvested when wasp numbers peak (Thomas 1960). Although costs from wasp damage appear to be relatively insignificant compared with other horticultural pests and diseases, even very small losses from individual growers add up across the entire horticultural sector. The biggest problems will be likely in orchards that have crops that i) are high in sugar (attract wasps), ii) need harvesting during the peak wasp period in February–May, iii) are hand-picked, and iv) have under low or poor management.

Mastitis is an inflammation of the udder tissue in dairy cows, and is a very common and costly disease worldwide. It is a serious problem in New Zealand, with estimates of its cost put at $180 million per annum (Malcolm 2006). Yeruham et al. (2002) found that German wasps inflicted injuries to the udder to ~40% of a milking herd in Israel; injuries that led to clinical and subclinical mastitis, and subsequently to large losses in milk production. Whether wasps cause lesions (and mastitis) in dairy cows in New Zealand is unknown.

However, wasps are a direct danger to stock, as they commonly nest in paddocks with grazing animals. There are antedoctal reports in New Zealand of stock dying (deer, sheep) after being stung on the tongue and being asphyxiated. Wasps are also a danger to farm workers cutting hay etc.

Entrance to a wasp nest.

Fraser (2001) surveyed public opinions to ‘wild animals’ and their management in New Zealand. Wasps were top (along with rats) of the most disliked wildlife, with public expressing highly negative attitudes to sightings of wasps during their visits to the outdoors.

When asked how they would split a $100 to control different pest species, wasps were ranked 3rd highest with $16.51 (behind possum $25.54, and rabbit $22.24), indicating the negative responses of the public towards wasps and desire for their control.

The risk of being stung appears to be the main reason for people’s dislike of wasps. The sting is painful at best and life-threatening at worst. A small proportion of the population will have a severe allergic reaction (anaphylactic shock), which can be fatal unless treated promptly. The more common reaction is localised swelling around the sting site which can be uncomfortable and itchy for a number of days.

Disruption to recreational activities is the most common complaint of people associated with wasps. In some areas, schools have had to close because of the risk of children being stung while eating their lunch or playing outside. People's enjoyment and safety outdoors can be greatly diminished by wasps.

There is also health costs associated with stings. A survey in Auckland recorded that an estimated 850 people sought medical attention for wasp stings in 1992 - 93. Costs of visits to doctors and prescription charges were estimated to be between $33 900 and $35 500 in 1991- 92 (Dymock et al. 1994). A basic extrapolation of these values just for Vespula wasps in 2012 (based on comparisons between the 1994 and 2006 census) indicates that approximately 1300 people seek medical attention for Vespula wasps stings across New Zealand each year (this does not include the total number of people stung each year but who do not seek medical attention, which would be far higher). The economic cost of this (based only on the cost of a doctor’s visit, estimated at NZ$20–50, and not on any lost time/productivity) is estimated between $27,440 and $68,600 per annum.

A health study examining the causes of anaphylactic deaths in Auckland between 1985 and 2005 showed that four deaths were attributable to either wasp or bee stings, suggesting there was additional evidence that at least two of these deaths were definitely from ‘wasps’ (Low & Stables 2006). Scaling up these data suggests there is between 1 and 2 deaths every 20 years in Auckland from anaphylactic shock caused by wasps.

About 3‒6 deaths occur every 20 years from anaphylactic shock caused by wasps in New Zealand; with 1 person dying every 3.5 – 7 years.