Researchers in New Zealand are developing a range of tools for controlling wasps. Methods such as ‘baiting’ are for localised short-term control, while biological control is for widespread long-term control. It is likely that several control tools will be needed to solve New Zealand’s wasp problem.

Biological control is where natural enemies (i.e. biocontrol agents) are utilised to reduce pest numbers. Natural enemies are typically invertebrates and pathogens, and almost always come from the native ‘home’ range of the pest, and therefore need to be imported into New Zealand.

Classical biological control offers a long-term, self-sustaining and environmentally friendly way of reducing wasp numbers. However, wasps would never be eliminated because the control agents depend on wasps for their own survival. We need an organism that will attack wasps and do well in New Zealand conditions but not harm other insects such as honeybees. Finding suitable biological control agents can be a long process because identifying an appropriate agent and screening it to make sure it attacks only wasps can take several years. Once an agent is set free in the environment, it may take many more years to have any noticeable effect.

Some biocontrol agents are less suitable for classical biological control but are more suited for Inundative Biological Control. These agents are usually released in massive numbers and ‘inundate’ the pest, suppressing it numbers. However, these agents generally have trouble in sustaining their large populations, and so need to be re-released at regular intervals.

In their native range, a Vespula wasp colony is a habitat for a wide range of organisms. Many types of species occur in their nests, some are predators, others feed on remains of dead wasps, some utilise mould or the paper nest structure; others are parasitic. Unfortunately there is very little information on what species attack wasps and even less information on the damage they exert on Vespula.

Biological control for wasps in New Zealand has received significant attention with the main focus on parasitoid wasps in the genus Sphecophaga. These are parasitoid wasps that attack the larvae of Vespula wasps (and a few other social wasps), laying their eggs on the outside of the developing larvae and pre-pupa. These eggs develop into larvae and consume the wasp host. Species of Sphecophaga are approximately 5–8 mm in size and are from the family Ichneumonidae (Order: Hymenoptera).

Despite being released at many sites throughout New Zealand, the species Sphecophaga vesparum vesparum, is only known to have established at two sites (Ashley Forest, north of Christchurch, and Pelorus Bridge in Marlborough) and there is no evidence it is reducing wasp numbers.

Several species have been proposed as biocontrol agents against wasps, but few have been thoroughly assessed in terms of their likely impact, or non-target impacts.

The two most promising agents include:

The potential for this ‘new discovery’ as a biological control agent is now being assessed with funding from the Sustainable Farming Fund.

Pathogens (agents causing diseases) are a factor regulating many insect populations. For example, research into controlling honeybee diseases is of ongoing importance to the beekeeping industry. Pathogens are also beginning to be used to control social insects such as termites and fire ants.

Previous research has shown that a number of pathogens have been recorded from Vespula nests (and some other related social wasps), including 50 fungal, 12 bacterial, 5–7 nematode, 4 protozoan, and 2 viral species.

To date very few pathogens have been confirmed as actually pathogenic towards wasps, but pathogens remain significant biocontrol option for wasps; perhaps best suited as inundative control agents, or delivered in combination with other natural enemies (e.g. Pneumolaelaps mites, see above).

Wasps have a natural defence against some pathogens. They have antibiotics in their saliva and venom, and can quickly detect and remove infected individuals from the nest before disease spreads. However, it may be possible to overcome this cleaning behaviour by combining chemicals with pathogens.

Research is currently underway at Victoria University examining pathogens of wasps in their native and introduced ranges, and whether the lack of natural enemies results in successful invasion for wasps.

Merchento, a Nelson based pest control company, has launched Vespex® ‒ a bait designed specifically for the control of Vespula wasp species.

Vespex® is not attractive to bees, and is of very low risk to birds, pets and people.

Vespex® is only available for sale to persons residing in New Zealand and who are registered with Merchento Ltd as approved users. This is because the bait does contain an ecotoxin, and there are strict stewardship controls in place to ensure that the bait is used in a way that does not present a threat to the environment.

The use of baits has long been recognised as an effective control method for wasps. Worker wasps are attracted to a bait station and feed on a protein food source containing a poison, they then return to their nest spreading the poison around the nest. The advantage of baiting is that you don't have to find and approach nests.

Although baiting is very effective during the current season, in the next season, the area will almost certainly be reinvaded by queen wasps, which can fly many kilometres before establishing a nest. The problem will therefore have to be dealt with each year. 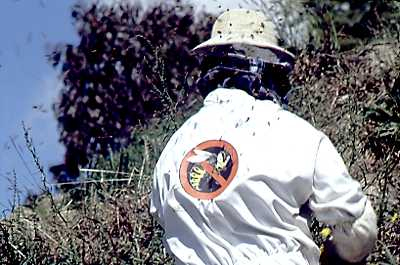 Both common and German wasps usually build their nests underground, often in sunny spots or along the banks of streams. Nests are also built in hollow trees and can be found under the floor or in the roof space of houses.

As the entire biology of social wasps is dependent on the nest, direct poisoning of wasp nests is the most effective control method. When a nest is found an insecticidal dust or powder can be used, in which the powder is ‘puffed’ into the entrance of a wasp nest. Worker wasps flying in and out of the nest will spread the powder through the nest, and the colony usually dies within a day.

However, the main problem is finding nests. Wasp nests are usually found by watching for ‘lines of flight’ of worker wasps returning to their nest, or walking along tracks or transects searching for nests. This requires some skill, but can also be quite time consuming. It is also impractical over areas of a certain size.

Several products are registered in New Zealand for use against wasps. These products are available most garden and hardware shops, and from their distributors.

Caution: If you are not confident about destroying a wasp nest do not proceed. Only treat nests that are easily accessible and allow a quick and easy retreat. Do not treat the nest yourself if you think you are allergic to wasps. Use only chemicals that are registered for use in your country and read all labels before use.

Commercial pest destruction firms will remove nests that are difficult to get at. Your local council may also help, especially if the nest is on council land. 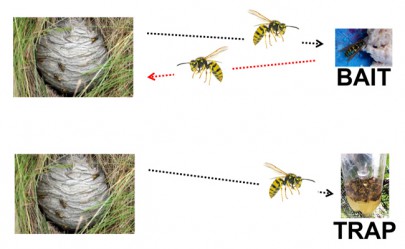 The difference between a bait and a trap.

Trapping is when large numbers of wasps (either workers or queens) are lured to a ‘trap’ and killed within it. Placing a traps around an area (e.g. picnic ground) to intercept foraging workers is conceptually simple and appealing. Trapping is also self-fulfilling because ‘dead wasps’ are seen in traps. However, there is no evidence to show trapping is effective, and by itself does not provide area-wide control.

Other issues with trapping include:

Essentially wasps do not have the biological characteristics suitable for mass trapping. Wasps are very fast to reproduce; short-lived; they are widespread and present in high densities. It is unlikely that mass trapping can remove worker wasps fast enough to compensate for the high reproductive output of the nest.