Bushglen Reserve is an unassuming patch of nature nestled in Auckland’s Browns Bay. It doesn’t have a playground or a picnic area or even a map of the many scattered paths. But it has one thing that few other reserves can boast –maire tawake, also known as swamp maire. These Threatened-Nationally Critical native trees are badly infected with myrtle rust. 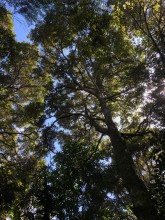 Bushglen Reserve is part of the Taiaotea catchment. Today, the whole reserve is classified as a Significant Ecological Area. But this wasn’t always the case. In the 1990s, the area was slated for development, a move protested by locals. It was only when a pre-development environmental survey was conducted that the maire tawake (swamp maire; Syzygium maire) were identified.

“The report from the survey fueled resistance to development,” says Kathy McCormack, a member of the Friends of Bushglen Reserve. “Locals tied big mylar balloons to the tops of the trees to increase their visibility.”

The maire tawake saved Bushglen Reserve from development. Now Kathy and others in the group are doing their best to return the favor by keeping invasive weeds and predators out of the reserve. They are also trying to find solutions to a newer threat – myrtle rust. Maire tawake are highly susceptible to the disease, and Kathy has seen the infection on young trees that have been planted and tended to over the years. A recent survey by Auckland Council, using a cherry picker, has revealed that even the upper canopies of the mature trees are heavily infected.

In December and January, Rob Beresford from Plant & Food Research and Auckland Council staff visited the reserve to investigate the extent of myrtle rust and to assess what could be done for the trees.

“Myrtle rust will ruin their future if something isn’t done to help them,” says Rob. “We’d like to protect them however we can.”

Rebekah Fuller, Senior Plant Pathogens Advisor at Auckland Council, added “We are working with Friends of Bushglen reserve, researchers, like Rob Beresford, and our specialist arborist staff to monitor and develop strategies to protect these trees.”

While there is no cure for myrtle rust, it is possible to keep infection at bay through the careful use of well-timed fungicide applications, providing the fungicide poses minimal risk to the wider environment. Rob pointed out that it’s impractical (and usually impossible) to apply fungicide to new growth at the tops of mature trees. However, it may be possible for Kathy and the team to help the younger plants survive until they are big enough to withstand infection and produce seeds.

But the best, most practical thing that will help is to keep myrtle rust out of the neighborhood.

“I see infected monkey apple or lilly pilly hedges in many yards in Browns Bay,” says Kathy. “I wish people knew that it isn’t just a garden nuisance – it’s making things worse for our native plants too.” 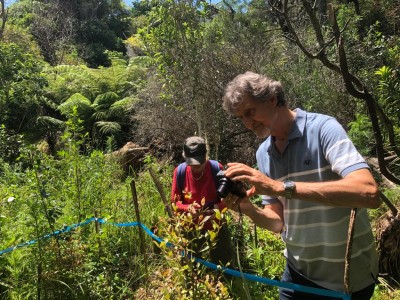 “The disease is less active during in the winter,” says Rob, “so there is less chance that the new growth that occurs after pruning will become infected and spread the disease.”

The plight of maire tawake in Bushglen Reserve is an important reminder that we all have a part to play – by working together, councils, researchers and community groups stand a better chance of protecting our native Myrtaceae from this devastating disease.