The spores next door: student to investigate ‘pathogen spillover’ effect for myrtle rust

Ngaio Balfour, a Beyond Myrtle Rust student, is in the second year of her Master’s. Based at Scion for her field and lab work, she started her field work in January this year, focusing on ‘pathogen spillover’ and pathogen genetics.

Ngaio’s field work was bound to be complex because she wanted to answer two very different questions. One was about pathogen spillover. To determine whether pathogen spillover was occurring in the field, Ngaio needed to collect data on myrtle rust infections levels for ramarama (Lophomyrtus bullata), a highly susceptible species, and three species of climbing rātā that are believed to be less susceptible.

“If you have a highly susceptible host species and it gets very infected, it can produce a lot of inoculum, in this case a lot of spores,” says Ngaio. “That can make less susceptible species nearby more likely to be infected.”

In addition to measuring infection levels, she needed to simultaneously collect plant material to analyse the genetic diversity of the disease. But after months of planning and revising, Ngaio felt confident about her strategy for completing her plot-based fieldwork at Te Papakura o Taranaki | Egmont National Park.

Things didn’t go quite to plan.

“The first plot we tried took us 3 hours, and we were planning on doing 5-7 plots a day,” says Ngaio. “So, we sat down in the middle of the bush and worked out how we were going to do this.” 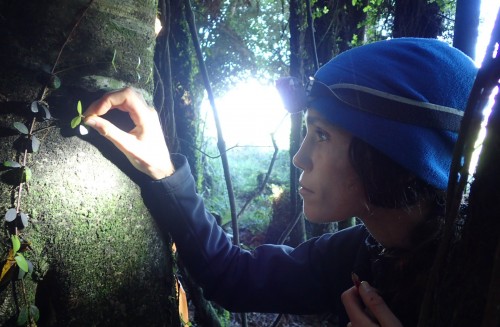 Ngaio has learned from this experience, and from other experiences during her Master’s so far, that prioritizing is a critical skill to have in the sciences.

“I think I have a tendency to want to do everything at once,” says Ngaio. “I’m grateful to my supervisors and to my field assistant Maria Zhulanov (Scion) for reminding me of time constraints when I would come up with new ideas.”

Ngaio’s next step is analysing the infection level data she has collected to see if there is evidence of spillover. Ngaio will also be conducting lab work on the infected plant material she collected.

“I’m going to use genotyping-by-sequencing to look at the genetic diversity and variation of the pathogen on different host species,” says Ngaio. “It may be that the pathogen is adapting to different hosts or is more genetically diverse on one host than another. Having this information will give us an idea of the pathogen’s potential to evolve.”

Although Ngaio enjoyed the field work, the lab work has been challenging.

“It’s good for me,” says Ngaio. “I am learning to be patient and mindful and detail orientated, and I will get it done. But it is not my dream job.”

For Ngaio, a dream job would involve teaching.

“I love teaching,” says Ngaio. “That’s ideally going to be part of my job whatever I do.”

Her dream job would also be something that isn’t all-consuming.

“Something I’m learning is that mental health is really important,” says Ngaio. “I am committed to a future with a balance between work and life.”

Ngaio says her Master’s has been a great learning experience. She is also in the enviable position of making a real contribution at a Master’s level to improving our understanding of an important disease that is a threat to the biosecurity of Aotearoa.

“I know Master’s is always a tiny slice of science,” says Ngaio. “But it’s nice to be working on something that will hopefully be contributing to protecting the environment.”

Congrats Ngaio on a successful field season, and good luck with the lab work, data analysis, and write up.