There’s still plenty of local community interest about the research and management of myrtle rust.

That’s what Scion and the Tauranga DOC (Department of Conservation) office found out when they teamed up in Conservation Week this year.

Scion field technician Roanne Sutherland says there were two events that both shared the message ‘if you find myrtle rust don’t touch it – take a photo and send it to iNaturalist’. 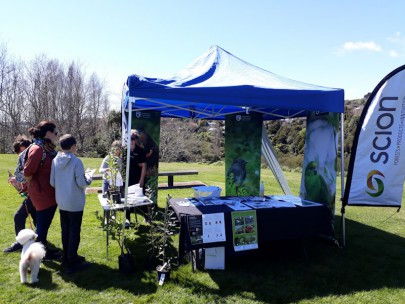 The first event, called Meet the Myrtles, was held at Waipuna Park in Welcome Bay and aimed to educate people on how to identify a myrtle plant and what myrtle rust looks like.

Roanne says they had the opportunity to talk to Tauranga Iwi, dog walkers, families and the local care group.

“Kids and big kids at heart were able to participate in a myrtle hunt, which involved identifying a myrtle tree in the reserve or one of the plants we had on display. If they were also able to identify myrtle rust they had the opportunity to win prizes.”

A range of groups there continued the message on how to best manage myrtle rust in the local area.

At both events Roanne says there was lots of interest in the Beyond Myrtle Rust research programme, as well as how communities could help with myrtle rust monitoring.

“There was also frustration in the community about the lack of engagement and signage in the areas were myrtle rust is present. A few expressed that there should be more funding available now for research.” Roanne says.

A massive thanks to Beyond Myrtle Rust for their support of both events.