Sexual, heterothallic, and tetrapolar - oh my!

A recent study by Australian and Brazilian researchers has found Austropuccinia psidii, the fungus that causes myrtle rust, likely uses a mode of reproduction that could lead to rapid evolution of the pathogen. This, in turn, could increase the threat myrtle rust poses to Myrtaceae species. Beyond Myrtle Rust researcher Alistair McTaggart contributed to the study, published here in the journal ‘Fungal Genetics and Biology’. In this article, science communicator Jenny Leonard explains what the researchers found, what it means, and why it matters in the fight against myrtle rust.

Austropuccinia psidii can reproduce sexually as well as asexually. In asexual reproduction, the fungus clones itself. Any changes to its genetic makeup are due to random mutations, and the organism changes slowly over time. Sexual reproduction splits and joins genetic material from two individuals, leading to more genetic diversity in the fungal spores produced. The more diverse a species, the more adaptable it is through natural selection. In the case of A. psidii, sexual reproduction may enable the pathogen to overcome plant defenses and adapt to environmental factors like temperature and humidity that currently limit its spread. 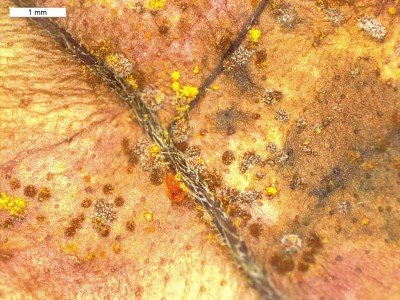 Knowing that A. psidii reproduces sexually means we know that it can change genetically in this way—the next questions are why and how does sexual reproduction happen? Mating in fungi is complex. Some fungi are homothallic, where mating occurs within a single individual, and others are heterothallic, where hyphal cells from a single individual are self-sterile and need another individual for compatible mating. A. psidii is a basidiomycete (placed in the Phylum Basidiomycota). Heterothallic basidiomycetes have two types of mating systems: bipolar and tetrapolar. If you want a deep dive into this subject, this tutorial on the different mating types might be helpful. But simply put, bipolar mating can occur between fairly genetically similar individuals and tetrapolar mating occurs between fairly genetically different individuals, the latter leading to more genetic diversity and adaptability and reducing the chance of inbreeding.

So, which mating type is A. psidii?

McTaggart and his colleagues demonstrated that A. psidii is likely heterothallic, meaning that sexual reproduction can only occur between genetically different individuals. Furthermore, there is evidence the fungus is tetrapolar, a mating type that selects for genetically diverse mates. The researchers used different strains of A. psidii from Australia, Brazil, and South Africa to show the genes that control mating were near-identical in these diverse strains. This theoretically means that the current strain we have in New Zealand (the pandemic strain) could hybridize with other strains if those strains were to enter the country. Were this hypothetical scenario to occur, a hybrid of different strains may arise that could overcome plant resistance or increase fitness of the disease.

So, there you have it: sexual reproduction in A. psidii could lead to outcrossing with other strains. And outcrossing would be most likely to occur later in an infection cycle. These kinds of insights move us closer to understanding this complex organism which in turn informs our approach to finding ways to mitigating the impacts of this disease.