Myrtle rust has been found on the Chatham Islands. This disease, caused by the invasive fungus Austropuccinia psidii, impacts plants in the Myrtaceae family (myrtles) including iconic New Zealand species like pōhutukawa. However there are no endemic Myrtaceae on the islands and the find was made on the highly invasive Myrtaceous weed Chilean guava (Ugni molinae). This has led Peter de Lange, a researcher with the Beyond Myrtle Rust programme, to believe there could be a silver lining to this discovery.

In late March, a member of the public brought a diseased plant sample to the Department of Conservation (DOC). The sample, which was confirmed as myrtle rust, was from the north end of the main island.

“So far, we have only found myrtle rust on Chilean guava,” says Kerri Moir, an employee of Environment Canterbury who went to confirm the find and check the spread of the disease. 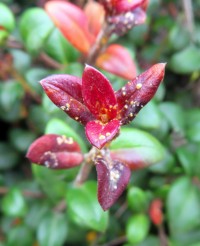 Chilean guava is native to Chile and adjacent regions in South America.

“On the Chatham Islands, some locals harvest and eat the fruit and use it for jams,” says de Lange. However, it is an incredibly ecologically destructive plant.

“It’s made an absolute mess of the north end of the island, particularly in swampy areas,” says Moir. “Because it is bird dispersed, there’s no way to stop it.”

New Zealand’s native Myrtaceae are uncommon in the Chatham Islands and nearly all the ones that grow there were introduced from the mainland.

The presence of myrtle rust on the Chatham Islands may threaten garden plants and the handful of exotic eucalyptus species that have been planted. However, while A. psidii is an unwanted organism under the Biosecurity Act 1993 and infected plants should not be moved by people, it may also end up behaving as a naturalized biocontrol agent for Chilean guava and help save a sensitive ecosystem from a weed invasion.

“We’ve needed a biocontrol agent for Chilean guava, and it looks like we’ve gotten one by accident,” says de Lange. Given that there is no cure for myrtle rust and given its wind dispersed nature on the very windy Chatham Islands, it is likely that the disease will spread.

So, while myrtle rust remains a dangerous disease that is threatening New Zealand’s taonga species, there is some hope in this particular case that it might end up doing more good than harm.

If you live on the Chatham Islands and are concerned about myrtle rust or your garden myrtles, please visit the ECan website or contact Kerri Moir.