The recent find of myrtle rust on a mature hedge in residential Christchurch marks a new southern point for the likely establishment of the disease. Previous sightings in this area have been on plants purchased in nurseries in other regions and relocated to Christchurch.

David Havell, a technical adviser for the Department of Conservation, came across the hedge of the Lophomyrtus cultivar while he was out walking and reported the infection on iNaturalist. He has been following the trajectory of myrtle rust since it was first found in New Zealand in 2017 and was involved in identifying the first (and northern-most) find on Raoul Island. 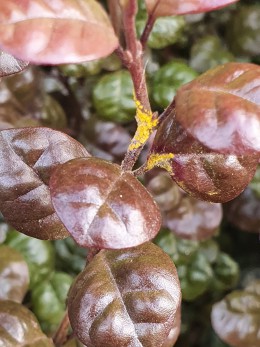 Myrtle rust symptoms on the Lophomyrtus cultivar observed by David

“Because I knew Lophomyrtus to be particularly susceptible to myrtle rust, I took a closer look,” says David. Sure enough, there were clear signs of infection – tiny yellow pustules (structures containing spores) were present on new leaves and the disease was also on parts of the stem.

“It looks like the infection was quite recent,” he says. “In my experience, plants that have sustained prolonged infection often present with dead stems. In this case, only the leaves had sustained damage, although there were spores on some of the stems.”

Myrtle rust, which is caused by the fungus Austropuccinia psidii, infects many of New Zealand’s native myrtle plants, including pōhutukawa, mānuka, ramarama, rōhutu, rātā and swamp maire. Bad infections can be deadly.

Environment Canterbury was quick to deploy biosecurity officers to confirm the finding. It conducted a local search for susceptible plants, door-to-door surveys of surrounding houses, and a mail drop of information pamphlets.

“We haven’t turned up any additional infections,” says Laurence Smith, principal biosecurity advisor at Environment Canterbury. “We plan to have another survey in late spring when myrtle rust is more active.”

The disease is most frequently seen across the North Island and the top of the South Island, and Christchurch has generally been considered a low-risk environment for myrtle rust, which thrives in warm, moist areas.

However, when Robert Beresford and Rebecca Campbell, researchers from Plant & Food Research, conducted a weather risk analysis for Christchurch for the months preceding the report, they found conditions in the area were suitable on some occasions during summer and autumn.

“Weather conditions were favourable for myrtle infection on 25 individual days during summer and early autumn with a period of particularly high risk in late February and early March,” says Robert.

The weather conditions in this period were similar to the previous year when local spread of rust was not observed. Robert suspects that a slow build-up of undetected spores over many months paired with periods of favourable weather resulted in an infection.

“Rust is likely to be establishing in Christchurch and can be expected to be seen more often from now on,” says Robert.

Laurence is keen to know whether this is the case. He asks that the public please report any findings of myrtle rust on iNaturalist and to especially keep an eye out from next spring.

“We’d like to know where this infection came from and if there are any more infections out there,” he says.

If you think you’ve seen myrtle rust, please report your discovery on iNaturalist.

To read more about the weather-risk assessment conducted by Robert Beresford and Rebecca Campbell, click here

For more information about myrtle rust, please see our FAQ or https://www.myrtlerust.org.nz/