Myrtaceae – an “important” family for a carbon-neutral future

Did you know that the plant family Myrtaceae is one of the most ecologically important families in Aotearoa New Zealand’s woody ecosystems? Researchers used abundance, species richness, and plant traits like wood density to determine how valuable these plants really are to our ecosystems and uncovered their potential to capture and store carbon.

If you google “important”, the first definition according to Oxford languages is “of great significance or value.” The example sentence they give is "important habitats for wildlife." But how does one determine how “important” something is, especially something as big and complicated as a habitat?

A recent study, published in the Journal of Vegetation Science, has attempted to quantify the importance of Myrtaceae, a family of woody plants threatened by the disease myrtle rust. Myrtaceae are widely acknowledged as an “important” part of Aotearoa New Zealand’s ecosystems, but researchers wanted to quantify that importance.

Using nationwide forest and shrubland inventory data collected from 2009 to 2014, researchers discovered that Myrtaceae is a particularly important plant family in New Zealand natural ecosystems based on its abundance and species richness compared with other co-occurring woody families.

“Myrtaceae occurred in 74% of the plots we looked at,” says Insu Jo, lead author of the paper. “And its importance value was the second highest after Nothofagaceae, also known as the southern beeches.”

“In general, Myrtaceae tend to be tall trees with dense wood,” says Insu. 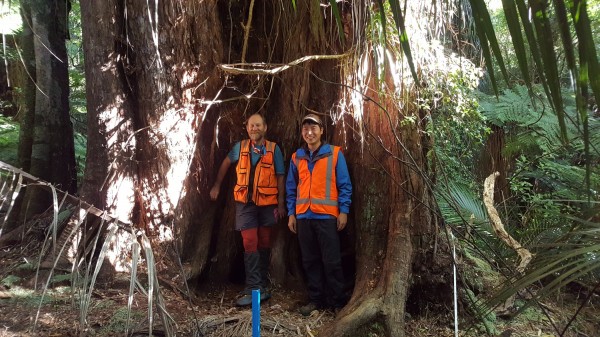 These properties enable Myrtaceae to store a large amount of carbon. On top of that, high wood density leads to a slower rate of decay after a tree dies. Myrtaceae can also be long-lived, with some individual trees surviving for over 1,000 years. Together, these traits make the family an important one for stable carbon storage.

Not only do the trees themselves store carbon, but they also provide habitats for other organisms to thrive. Preserving and restoring intact ecosystems are essential activities for maintaining biodiversity and lowering levels of atmospheric carbon, helping slow climate change.

However, our Myrtaceae continue to be threatened by myrtle rust. Researchers are only beginning to understand the differences in susceptibility at a species or even individual level – like with COVID-19, some individuals are more hard-hit than others.