“We went down to investigate and the trees were yellow and orange with disease,” says de Lange.

While they were inspecting the trees, they saw the honeybees.

“They were going through and systematically harvesting urediniospores and flying away with them.” 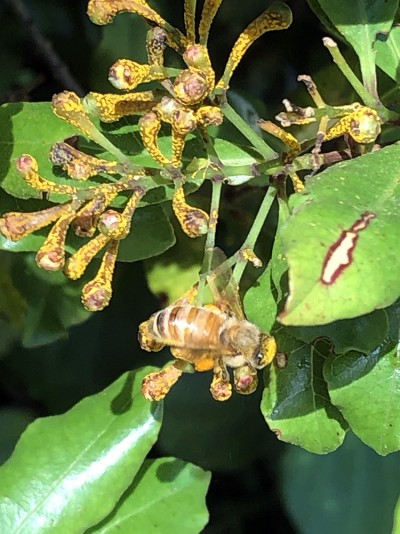 De Lange had heard about this phenomenon from colleagues in Australia, but he had never observed it himself. This behavior had not previously been documented in New Zealand.

“It’s a very concerning behaviour,” says de Lange. “Research in Australia has shown that foraged spores can remain viable on bees and within a hive for up to nine days.” That research, funded by MPI, can be accessed here.

Not only were bees collecting the urediniospores, they were choosing to harvest these spores instead of collecting nectar from nearby flowers. It is yet unclear why the bees preferred the spores over the nectar from the flowers.

“You would think bees would only harvest urediniospores if there were no flowers,” says de Lange. “But what we were seeing was that they were ignoring the flowers, including the white clover, houhere and tree lucerne growing nearby, and harvesting the urediniospores instead.”

One possibility for this observation is that the bees are getting nutritional benefits from fungal spores, which has previously been investigated overseas, results from one such study can be accessed in this paper.

The infected trees have been removed, but the degree to which this phenomenon could be occurring throughout New Zealand remains unknown.