Covid-19 lockdown resulted in plenty of challenges and opportunities for everyone in Aotearoa. Whether this was learning to work with your "colleague" streaking through the "office", or realising that your partner has a laugh reserved just for work, everyone has a story or two to tell. 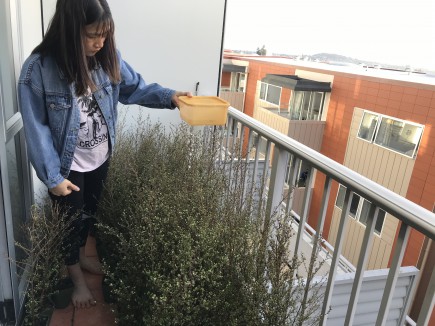 For Hoa Nguyen, lockdown meant possibly being shut off from the plants that are vital to her PhD studies.

She was only a few months into her research on myrtle rust impacts on plant physiology when it was announced she would not be allowed into the Manaaki Whenua glasshouse for at least a month.

A last-minute discussion with her supervisor resulted in Hoa quickly packing up all 200 pōhutukawa and rōhutu seedlings, and taking them home to her Auckland apartment.

“At first I was anxious, because we live on the fourth floor of a building in Auckland CBD, and of course, there is no garden at all,” Hoa says.

“I had to leave the trees on the balcony whether or not the balcony had enough space for them. But luckily, and surprisingly, all the plants fit.”

Her anxiety soon turned to enjoyment when the whole family realised they quite liked having some house plants.

Every day Hoa’s son, 5, would help water the home experiment, and on his return to kindergarten he made sure to tell everyone the family had a garden his mum had brought home from university.

All the plants were disease-free, allowing Hoa to record initial growth patterns without the influence of myrtle rust.

But unfortunately, Auckland is a hot spot for the pesky pathogen.

“A week before moving down to alert level two I realised six pōhutukawa plants had contracted myrtle rust,” Hoa says.

“I quickly separated these from the healthy plants. At first I was worried because I had to take them out of my experiment, but luckily it did not spread to any other trees.

“I have now been allowed to go back to work in the containment facility and six out of one hundred pōhutukawa is a small number, so the infection did not affect my experiment as I feared it might.”

And on the bright side, she can now leave the infected plants to accumulate spores, before using them to inoculate some of her plants in the next phase of the trial!

Hoa’s PhD is part of the Beyond Myrtle Rust programme and is hosted by the University of Auckland.