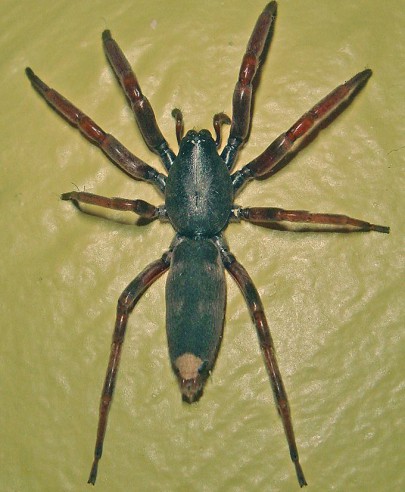 This Australian spider was first recorded in NZ in 1886, at Waiwera, Auckland. It is believed that it came into the country with early colonists and is now well established throughout the North Island. Another species Lampona cylindrata (Koch.L) is also known from Nelson and has recently been found in Christchurch. For many years the White-tailed spider was thought to be just the one species Lampona cylindrata but a recent revision of Australasian Lamponidae found that there were 61 species in Australia and just the two mentioned here occur in New Zealand.

These dark grey spiders are 12-17mm long and readily recognised by their elongate body form and a distinctive white patch on the end of the abdomen. Pale patches are present on the sides of the abdomen in juveniles but these fade in adults.

Their preferred habitat is under dry bark and plants but will often be seen inside houses, where they look for shelter from the light, after hunting at night. The spider often hides in clothing, especially if it is left lying around on the floor.

These nocturnal hunting spiders are unusual because they feed only on other spiders, preferring the grey house spiders, which build their zigzag webs on the outside of houses, on fences and car mirrors.

White-tailed spiders do bite but will only bite if handled or provoked. In most cases the bite will cause little harm, as there is nothing in the venom that will affect us.

There has been some media coverage in Australia and New Zealand in recent years about alleged White-tailed spider bites, but much of the information has been highly inaccurate. Describing the spider as "poisonous" is not correct, while links to necrotising arachnidism (where the flesh starts to die as a result of an infection in the bite) are also tenuous (see NZ Medical Journal reference below).

The main issue is whether a patient has actually been biten by a White-tail. In the majority of cases, there is no clear evidence a spider was responsible. Sometimes a spider is seen around the time of the bite, while in other cases it has been assumed it was a White-tail bite, either by medical personnel or the patient.

To test this, Geoffrey Isbister and Michael Gray studied 130 confirmed White-tailed spider bites (where the spider was seen biting and captured afterwards for identification) in Australia from February 1999 to April 2002. There were no cases of necrotic ulcers or confirmed infections. The full article they published is available online on the Medical Journal of Australia web site.

The New Zealand Medical Journal has also published research into the alleged toxic effects of Lampona species in patients admitted to Christchurch Hospital from January 2001 to January 2003. The article's conclusion is that there was no evidence of any patients developed necrotising arachnidism and that public fears of White-tail bites are misplaced. Thanks to NZ Medical Journal website for permission to refer to this.

A White-tail bite is immediately painful. It is usually possible to catch the perpetrator easily, since the spider has poor eyesight, and its identity can then be confirmed. It should be noted that cases of confirmed White-tail spider bites have rarely resulted in anything more severe than a red mark and localised, short-lived pain.

As with bee/wasp stings different people will react in different ways.