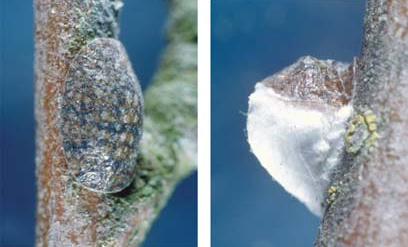 [Pulvinaria vitis]. L: young adult female. R: mature female with eggsac (white and fluffy). As the eggs are laid into the soft wax, the female's body is lifted up until it is about at right angles to the branch.

Linnaeus named this species vitis in 1758, presumably because it was found on grapevines.

Status in New Zealand: an exotic (adventive) species, first recorded here in 1951. Cottony vine scale is of little economic importance although sporadically a nuisance in apricot and peach orchards in the South Island. Not found on native plants.

Biology: one generation per year in New Zealand, overwintering on the twigs as immature females. The new generation is produced through summer.