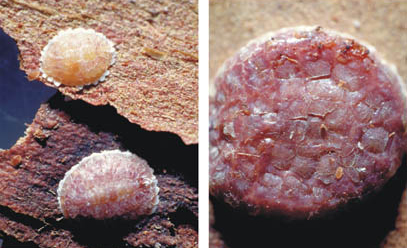 [Poropeza dacrydii]. L: 3rd-instar female (yellow) and young adult female (reddish colour), on the underside of bark taken from a totara tree. R: mature female with a crawler (orangey colour) walking over her.

William Maskell named this species in 1892, from the latin genus name Dacrydium [rimu], one of its host plants.

The female is large, and flattened from being compressed between bark layers. Her waxy plates are fragile and hardly joined together, because there is little need for their protection in the under-bark habitat.

Biology: one generation probably lasts more than a year, as the growth of females from small to mature is slow. Large numbers of crawlers are produced through winter; they migrate out from under the bark to settle on the underside of leaves or on small stems. Males complete development to adult within about two months. Females develop to the 2nd-instar stage, then disappear, perhaps to feed on fine roots underground, as their next pre-adult stage [3rd-instar] has only been found once in litter, or, when a larger size, under bark on tree trunks [as in photo]. It is not known how or where the adult males mate with females, but if with females under bark, they could be females from a previous generation to the males.