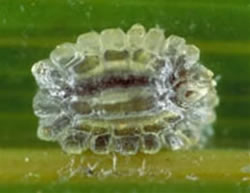 [Plumichiton nikau]. An adult female. She is convex with a thick glassy wax test.

This species is named for its host plant because it has only been found on nikau palms, Rhopalostylis sapida.

Found on the both sides of leaves of: