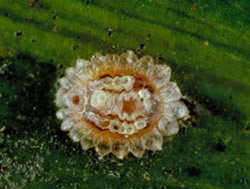 William Maskell named this species in 1884, for its golden colour. Sometimes it is browner in colour.

Biology: one generation per year. Probably overwinters as the young adult female. Much honeydew is produced by colonies of this scale insect; this was particularly notable in Fiordland, where the host trees were blackend with sooty mould living on the honeydew. Is susceptible to attack by the "orange puffs" fungus, Hypocrella duplex.

Found on the stems and leaves of: