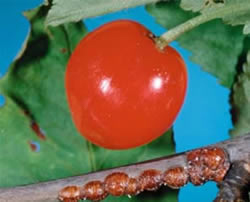 [Parthenolecanium corni]. Adult females on a small branch of cherry.

Bouché named this species corni in 1844.

Status in New Zealand: an exotic (adventive) species, first recorded here in 1891. Brown scale is a minor pest of plums, apricots and grapevines in both North and South Islands. Not found on native plants.

Biology: one generation per year in New Zealand, overwintering on the twigs as immature females. The new generation is produced through summer and the young tend to settle on the leaves before moving to the stems. Brown scale is parthenogenetic and there are no males.