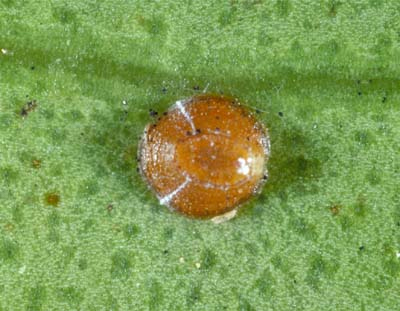 William Maskell named this species in 1882, after the host plant genus, and this scale can be found on rātā trees. It is common along the west coast of the South Island to Fiordland, and on Stewart Island.

Status in New Zealand: The button scales of New Zealand are unique in that their dorsal or upper part (the flat, oval piece in the middle of the scale) doesn't expand when adult. Instead, the venter or under part expands, and forms the outer sides. This is why the breathing channels, the two white stripes of wax in the photo, are visible, while in other kinds of scales they are hidden underneath.

Biology: probably one generation per year. Usually all stages are on the leaves but sometimes adult females are found on thin stems if there is overcrowding from other scales.

Found on the leaves of: