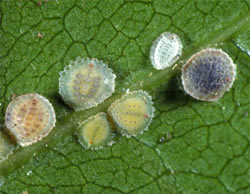 William Maskell named this species piperis in 1882, after the plant Macropiper or pepper tree.

Peppercorn scale females develop a sclerotised patch in each plate area [the spots on the young ones in the photo above] that grows until the patches cover the whole area [the dark grey female in the photo]. This is quite different from all the other native soft scales and so it has its own genus, Epelidochiton, the name meaning "freckled skin".

Biology: Seems to have more than one generation per year in warmer parts of New Zealand, and it has not been found south of the Nelson area. Females and males develop on the same leaves. The tiny winged adult males live for only a few days, long enough to mate with females. Unlike most other native soft scales, it is able to withstand urban environments, and can be found living on pūriri trees in Auckland parks and gardens.